President Muhamadu Buhari has urged politicians not to see the 2019 general election as a declaration of war.

Buhari said this while delivering his good will message at the swearing-in ceremony of Alhaji Gboyega Oyetola as Osun governor on Tuesday in Osogbo.

The president was represented at the event by the Secretary to the Government of the Federation, Mr. Boss Mustapha.

Buhari also urged all APC candidates in the election to conduct themselves peacefully, eschew hate speech and avoid violence.

Buhari also said that he was committed to building a better Nigeria by building the economy, fighting corruption and protecting lives and property.

While congratulating Gov. Oyetola, the president said Federal Government would continue to support the state in the area of infrastructure development.

Buhari said that Osun would be one of the five pioneer states that would benefit from N55.1 billion basic health provision by December.

The president, who noted that Federal Government had launched ‘trader moni’ free loan programme in the state, said 30,000 petty traders would have access to the loan in the state.

Buhari also said that his administration would complete all the ongoing infrstraucture projects in the state.

The News Agency of Nigeria (NAN) reports that the Chief Judge of the State, Justice Oyebola Adepele-Ojo, administered oath of office on Oyetola at 1:02 p.m.
His deputy, Benedict Alabi, took oath of office at 12:55 p.m. 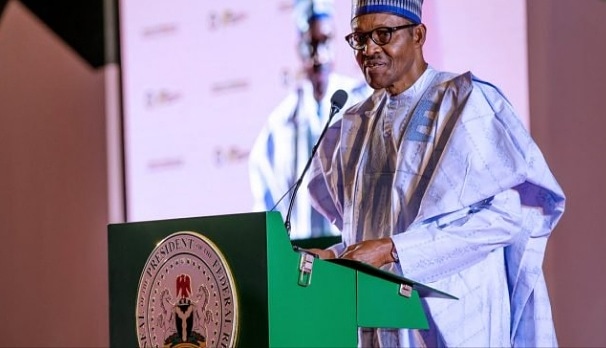