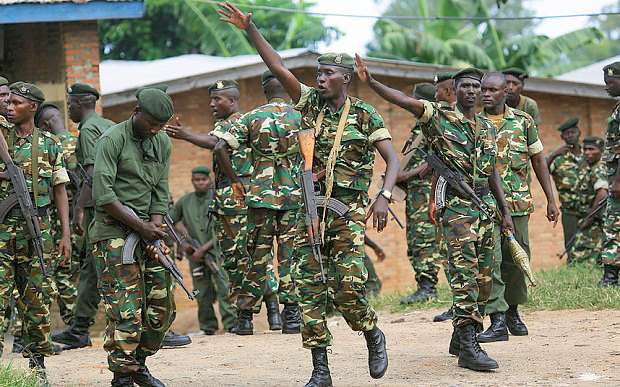 A senior Burundi army officer involved in intelligence has been missing from his post since the weekend and fellow officers said he had gone into hiding, the latest in a growing list of senior officers who have fled a nation where rebel groups have emerged.


Violence erupted in Burundi in April last year when President Pierre Nkurunziza announced his bid for a third term, which was opposed by a host of activists, opposition politicians and some military officers who staged a failed coup in May.
Officers behind that coup have said they would pursue an armed struggle until Nkurunziza quits.

The Defence Ministry has said it is aware of at least three active armed groups, although officials deny they pose any real threat.

It is not immediately clear how many fleeing officers have joined rebels groups, but hollowing out the army's senior ranks risks leaving a more partisan military that till now has kept broad public respect in an increasingly polarised nation.

Western diplomats fear the tiny nation could slide back into ethnic conflict, like the 1993-2005 civil war, which pitted what was then a Tutsi-led army against Hutu rebel groups. After a peace deal, rebel fighters were absorbed into the army.

Lieutenant Colonel Alexandre Mbazumutima, a Tutsi in charge of intelligence services at a military camp about 40 km east of Bujumbura, went missing at the weekend. He had been questioned after the May coup but was not arrested or taken to court.
"He hasn’t yet showed up for work since last Sunday but I don’t know where he is now," army spokesman Gaspard Baratuza said, adding he would be declared a deserter after eight days.

One of Burundi's rebel groups that emerged late last year, FOREBU, says it is led by the leader of the May coup attempt although Major-General Godefroid Niyombare has made no public declaration since the failed putsch.

Two other groups have emerged, including RED TABARA which has claimed responsibility for several attacks on officials in the capital. The government also says there are rebels affiliated to FNL, a political party that denied any links.

The diplomats say divisions in Burundi have till now run broadly along political rather than ethnic lines. But tit-for-tat killings have sometimes appeared to target members of particular ethnic groups, raising fears old wounds will reopen.