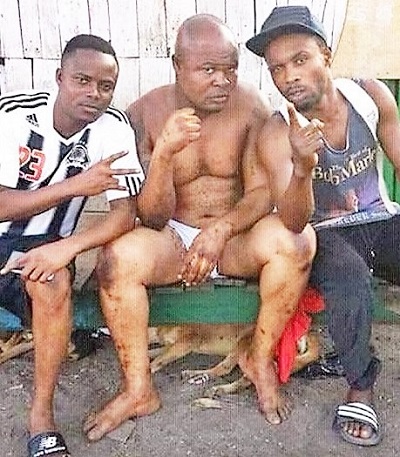 Famous Ghanaian boxer, Bukom Banku has confirmed he is bleaching.


According to him, he is bleaching for Ghanaian president, John Mahama to make him Ghana ambassador to Germany after he wins 2016 general elections.

Speaking with Bernard Allotey on Radio Gold’s Home Touch entertainment program on Thursday, he created the impression, skin colour plays an important role in the president’s appointment of ambassadors to Germany.

“I am bleaching my skin because when John Mahama wins 2016 elections, he will make me Ghana ambassador to Germany. I am bleach myself for German people to know that German people and Bukom Banku are one,” he said.

“Bleaching can’t affect my skin because I have a very good skin. Again rashes can’t affect me because I am using cleaning Claire and I am taking medicine as well. So if you see me now, you will observe that I am from Germany. I want Ghanaians to know that I am a German now. I am at Hoe right now with the president, John Mahama at Okudzeto Ablakwa’s constituency.”

“If I don’t bleach they won’t give me that position…and if you see me now I look fresh because of president, John Mahama,” he added.

Bukom Banku’s confirmation comes after photos of his bleached skin went viral on social media on Wednesday. A lot of people criticized him while other wondered if the photos were products of Photoshop.

But he said it is true he has bleached

“People shouldn’t be worried. I am changing my system for a while. I want to tell Ghanaians not to worry about me. I am pleading if them, I will bleach till August and then stop,” he said.

He added that he has put his boxing career on hold at the moment to campaign for John Mahama’s NDC party to retain political power. If the president didn’t win then he will go back to boxing career.