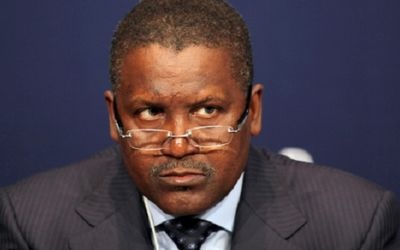 Popular business tycoon and richest man in Africa, Alhaji Aliko Dangote, has restated his commitment to assist the Federal Government in turning around and diversifying the country’s economy.


He said this in Lagos on Friday where he was honoured as “Man of the Year 2015’’ by The Guardian Newspapers Limited.

He said that he was working hard with his company to take Nigeria to the next level and that within the next two and half years, Nigeria was going to excel in some critical areas.

“Number one is refinery, Dangote Group is building a refinery which will produce 650,000 barrels of petrol per day; the current capacity that we have as a country now, both the ones that are working and the ones not working, is just 450,000 barrels per day.

“In fertilizer production, we are not only trying to satisfy the market, but our size is three million tonnes which is ten times more than what is available in Nigeria today.

“We are trying to make sure we satisfy the local needs and also export and we thought about how to address our power issues, the only way we can address power issues is to have enough gas and sort out distribution.

“Distribution is important because unless you collect money from the consumers, you cannot grow.

“There are two sub-sea gas pipelines coming from Bonny which will produce about three billion volume of gas which is exactly about the same size of LNG.


“Nigeria will also be the highest in terms of cement export in Africa,’’ he said.