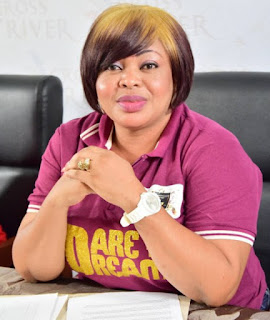 The actress took to her Facebook page to narrate the sad ordeal with men of the underworld.

‘I write with a heart filled with gratitude to God for his mercies are unending. I had a terrible experience with the men of the underworld on Sunday night,they blocked my vehicle on Ojuelegba bridge, a Honda Accord in front, a small ash colored car behind, four armed men, three of them got into my car, letting their previous victim go while they drove off with me in the passenger seat and the other small car trailing behind.

‘My Girlfriend who was driving in front of me, noticed there was a problem and tried to confront them, the scared of their Gun. They drove to an ATM machine, asked for my pin and withdrew as much as limit permitted on both my accounts, they took my tones and jewelries, the little cash I had in my purse and then used my car to block another victim, leaving me on the bridge to find my way.

‘The last two days have beenn very traumatic for me as I’m still in shock. If not for God, I refuse to imagine what could have happened. Vicky had made reports at different police stations, luckily I blocked off my line but it seems that somehow, they might try to get in touch with persons on my phone list, whatsApp and Imo, pls if u are on my contact list on either and u receive messages supposedly from me,pls call me for confirmation.’

Nollywood personalities like  Iretiola Doyle and Elvis Chuks have also been robbed recently in Lagos.