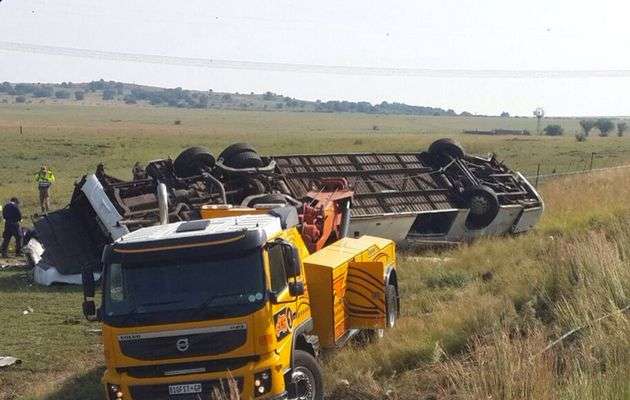 
The bus rolled off the N1 highway between Ventersburg and Winsburg in the Free State, trapping passengers underneath the vehicle, ER24 paramedics said in a statement.

The cause of the accident, after which 21 passengers were in a critical condition, is not yet known, ER24 said.

President Jacob Zuma launched the ANC's manifesto in Port Elizabeth on Saturday ahead of local elections in August. Around 40,000 ANC supporters attended the event in Nelson Mandela Stadium.

"The ANC has learnt with sadness of a fatal accident in the Free State where a bus carrying comrades returning from the ANC manifesto rally in Port Elizabeth overturned," the party said in a statement.

"Our thoughts are with the injured and bereaved at this time."

South Africa has problems with road safety. Some 4,500 people were killed in accidents last year, according to the country's Road Traffic Management Corporation.