South Africa: Malema to Al Jazeera - "We will run out of patience very soon and we will remove this government through the barrel of a gun."

Home / Current News / Politics / South Africa / South Africa: Malema to Al Jazeera - "We will run out of patience very soon and we will remove this government through the barrel of a gun."
Published by: Victor 10:06 Current News, Politics, South Africa

In Sunday’s episode of Talk To Al Jazeera, South African opposition politician Julius Malema tells Al Jazeera’s Jonah Hull that if the ruling African National Congress (ANC) continue to respond violently to peaceful protests: “We will run out of patience very soon and we will remove this government through the barrel of a gun.”


Malema is the commander-in-chief of the Economic Freedom Fighters (EFF), an opposition party he founded in 2013 after being expelled from the ANC, where he had served as president of the Youth League.

The exchange began when Hull asked Malema how far he was willing to go in his “war” against President Jacob Zuma and reminded him of his 2014 threat to make the entire Gauteng province ungovernable. 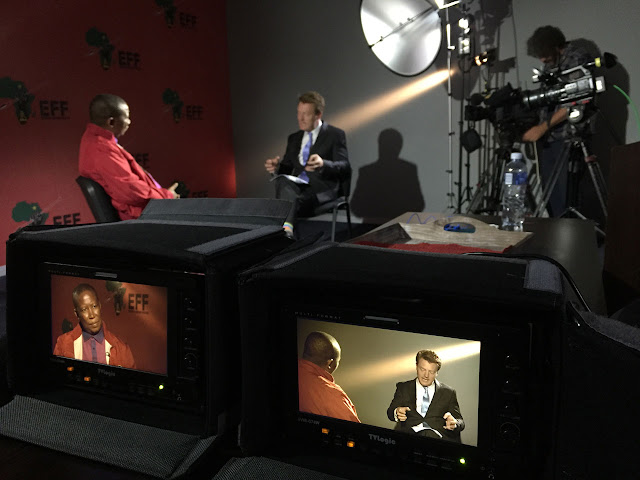 "'We will fight,' you said. ‘We have the capability to mobilise our people and fight physically,” Hull said. “That's not befitting of a government in waiting, is it?"

"We know for a fact that Gauteng ANC rigged elections here,” Malema replied. "We know for a fact that they lost Johannesburg and they lost Gauteng. But we still accepted it. But they must know that we are not going to do that this year. We are not going to accept. Part of the revolutionary duty is to fight and we are not ashamed if the need arise for us to take up arms and fight. We will fight. This regime must respond peacefully to our demands, must respond constitutionally to our demands. And if they are going to respond violently  - like they did in the township of Alexandra, just outside Johannesburg, when people said these results do not reflect the outcome of our votes, they sent the army to go and intimidate our people - we are not going to stand back. Zuma is not going to use the army to intimidate us. We are not scared of the army. We are not scared to fight. We will fight."

Hull asked Malema to clarify this. “When you say you are willing to take up arms, that's what you mean?”
"Literally."
"Against the government?"
"Yeah, literally. I mean it literally. We are not scared. We are not going to have a government that disrespects us."
"And on what basis, under which circumstances?"
"If they respond violently to our peaceful protest.”

Malema further clarified, “We are a very peaceful organisation. We fight our battles through peaceful means, through the courts, through parliarmiant, through mass moblisation. We do that peacefully. But at times, government gets tempted to respond to such with violence. They beat us up in parliament and they send soliders to places like Alexandra where people are protesting. We will run out of patience very soon and we will remove this government through the barrel of a gun.”