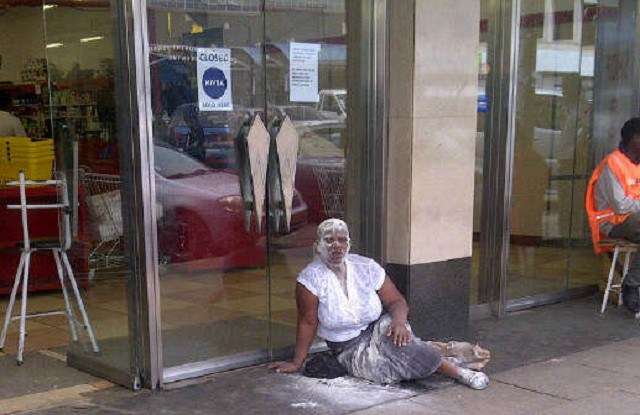 A female shoplifter who was caught in a Bulawayo supermarket in Zimbabwe, was given an unusual jungle treatment after she had a five kilogramme bag of flour emptied all over her body, B-Metro reports.

The woman was caught while trying to steal a bottle of bubble bath gel at the local supermarket and she was made to understand that stealing is actually a dirty business.

The woman who confessed that it was not her first time of stealing in the shop, has sneaked the item into her panties not knowing that another customer was watching the whole act.

After she was satisfied that the bottle was safely tucked away from the prying eyes of the supermarket security guards, the woman walked comfortably to the exit door, but unknown to her, the guards had already been alerted by the other customer and they told her to submit herself for a thorough search.

A customer who witnessed the disgraceful act, Allen Gumbo, narrated how it all happened:
“The woman was spotted by another customer trying to hide a two-litre bottle of Satiskin into her panties.
When the bottle was safely tucked between her legs she proceeded to walk to the door.

I think the bottle shifted forcing her to walk awkwardly and a female security guard quickly apprehended her. She was asked to pull up her skirt. It was really embarrassing to see a grown woman caught in the act. What is she teaching her children?”

After the disgrace, the woman was given the option of either being handed over to the police or pay the $5 price for the item which she promptly paid.