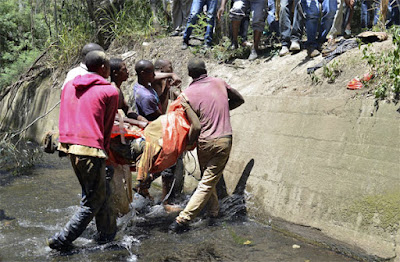 The bodies of the last two illegal miners trapped underground in South Africa’s oldest gold mine have been retrieved, a community representative said Wednesday, bringing the death toll to three.


Volunteer rescue workers surfaced with the bodies late Tuesday, nearly a week after a man first went missing at the disused Langlaagte mine in Johannesburg.

“We completed the work last night when we brought up the two bodies,” Ngqabutho Mabhena, chairman of the Zimbabwe Community in South Africa, told AFP.

“All the men that were underground are all accounted for.”


Police and emergency services were unable to confirm there were no more bodies in the mine.

The Langlaagte mine is where gold was first discovered in Johannesburg in 1886.

Mining operations at the site ceased many years ago, and the pit was declared a national monument in 1989.

Like many old mines around Johannesburg, the pit has been a target for illegal mining, when impoverished men — often migrants from neighbouring Zimbabwe and Lesotho — dig for nuggets which they sell on the black market.

Both victims brought to the surface Tuesday night were Zimbabweans, Mabhena said.

Mineral Resources Minister Mosebenzi Zwane said Monday his department had sealed off 200 holes in disused mines around Johannesburg in a bid to curb illegal mining.