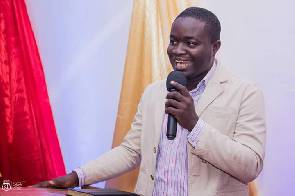 Everybody has a past life and one of the many gospel musicians who is ready to give a testimony is Eric Jeshurun Okyere.


The gospel minister on Accra FM’s gospel entertainment show, Gospel 360 revealed that he used to stimulate his genitals with his hand for sexual pleasure.

The musician during a long chat with Andy Favored on Sunday disclosed that he engaged in this act not conforming to accepted standards of morality for seven years. Sharing how he was introduced into the act, Mr Okyere said a senior he met back in senior high school ushered him into the deed which later became an addict.

“My second day at senior high school, I met my seniors at the bath house and they asked me to stimulate my genitals. I enjoyed doing it so I continued for about seven to eight years.

I at times left lecture hall just to go and do that. The devil wanted to kill me because it got to a time I became very weak. I did the thing for a very long time. I will eat but I’ll feel so light. At times there will be no sperms but I try to do it just to make myself happy.

I could do it for about seven times in a day until God revealed it to one pastor who helped me to stop.” Eric Jeshurun told Andy Favoured.