Obese lady 'works' towards becoming fastest woman in the world 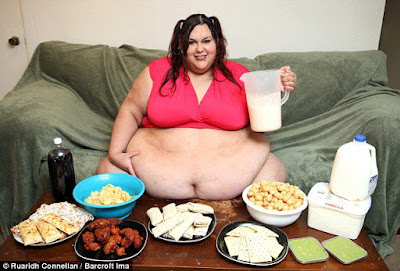 27-year-old Monica Riley models on websites for ‘Big Beautiful Women.’ Her goal is to reach 1ooo lbs to become the world’s fattest woman. She wants to put on so many pounds that her boyfriend would have to feed her through a funnel.


Monica who is a size 38, already relies on her boyfriend to help her move around and wash herself. She consumes just about 8000 calories a day and has to the goal of becoming the fattest person in the world and who will be immobile.

Her boyfriend Sid, 25 is just as excited about her journey as she is. According to them, Monica’s current lifestyle is a sexual fantasy to them and they like to talk about it. The plan is to have Monica so obese that her boyfriend, Sid will have to wait on her, hand and foot. She is also looking forward to never leaving her be because she plans to install a built in toilet.

She gets paid online by men to send photos and videos of her eating through the funnel.

Having been overweight all her life, Monica made the decision to let go and gain as many pounds as she could. Her boyfriend Sid whom she met online says he is willing to feed throughout her process and will stop with her if she ever decides to.