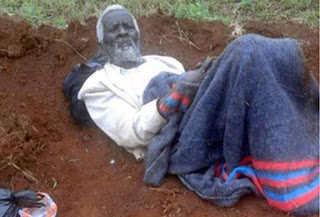 A paralysed 90-year-old man found near a graveyard in Mutomo Village in Gatundu, Kiambu County, Kenya, has left residents of the area shocked.

Kibure revealed that he was earlier admitted at a Gatundu hospital and later discharged, after which he was taken to his brother's house at Karembu in Gatundu South by his son who is base in Nakuru.

In the middle of the night on that fateful day, Kibure disclosed that his nephew's had woken him up, had him wrapped in a blanket before driving him in their car to where they dumped him at about 2am.

The distressed man told Citizen Digital of his land and property which he had sold, leaving him homeless, after which his children deserted him because he had become a burden to them since he lost the use of his legs.

Speaking with the media outlet, one of the residents of the area revealed that Kibure had once been a prominent business man working with the ministry of Agriculture.

The resident added that Kibure soon started to indulge in alcohol, so much so that he sold all of his properties.

The area chief, Mutheki Muiri, has been called to handle the situation.