Pastor arrested, charged for kissing a girl during exorcism 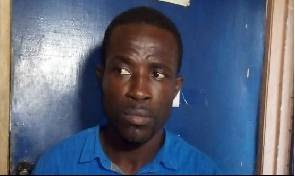 A 40-year old preacher who forcefully kissed an 18-year old girl under the pretence of exorcising some demonic spirit from her has been arrested by the Tesano Police in Accra.


Edmund Kakrae Agyei, the founder and leader of the Faith Word Church International at Nii Boi Town in Accra, has consequently been charged with indecent assault and breach of trust.

The incident happened on August 30, after the pastor had through the victim’s parents invited her to the church premises in order to cast out the said demons from her.

The pastor was said to have told the mother of the girl on August 28 that he had a bad vision about the girl and that he needed to see her to do some exorcism. The mother subsequently informed her daughter who went to the pastor.

He allegedly took the girl, a senior high school graduate, to his home where the pastor sought to find out from the girl whether she has been receiving love proposals from men to which she answered negatively.

Pastor Agyei according to the Police, asked the girl if she has been experiencing menstraul pains.

The girl responded in the affirmative and the pastor asked her to allow him smear some holy oil around his navel. The victim obliged and the pastor smeared the oil.

After that, the pastor was said to have told the victim that he can only deliver her by applying some of the anointing oil on her clitoris but the girl refused.

According to the Police, the pastor reportedly grabbed the victim tightly and forcefully kissed her in the mouth and attempted to force her to have his way but the girl resisted and raised an alarm.

Realising that his plan had backfired, the pastor is said to have told the girl he was only to establish if she is a disciplined girl.

The victim rushed home to inform her mother and the matter was reported to the Tesano Divisional DOVVSU leading to the arrest of Pastor Agyei.

The Pastor reportedly admitted the offence in his caution statement to the police but blamed it on the devil. According to the police, the pastor said he was possessed by the devil, which instructed him to do that.