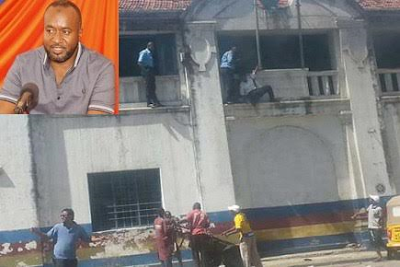 
Mombasa County Commander Peterson Maelo said the three women, who walked into the station pretending to report a stolen phone, brandished knives after they were barred from accessing the cells with one throwing a petrol bomb in an attempt to burn down the station.

Maelo said one of them stabbed the officer manning the report desk forcing his colleagues to shoot them.Two died instantly while one was shot as she attempted to escape.
This sparked a police operation with officers from paramilitary General Service Unit being deployed at the station. Gun shots and an explosion were also heard in the premises, located at the center of the city, which was immediately cordoned off.

Two police officers were rushed to hospital with injuries following the attack. Unconfirmed reports indicate that the attackers were attempting to free some prisoners held at the police station. Maelo, however, said the motive of the attack was not yet known and investigations were underway.

Pictures showed police officers on window of the first floor of the station while jumping off from the fire that had been started. Top politicians led by Mombasa Governor Hassan Ali Joho visited the scene and complimented police for their swift action.

"It is unfortunate that we wake up to this incident, especially on a day when Hajj is being conducted. It is a dark day in Mombasa,”"said Joho who termed the incident a ‘heinous crime’. I urge the security agencies to publish the names and pictures of the attackers so that we investigate their background and help curb such incidents in the future,"  said Joho.

He urged the residents to stay calm as security agencies were on high alert on all public places.

County Commissioner Evans Achoki noted that there was a likely change of tactic by terror groups as it has not been usual for women to launch terror attacks. Police spokesman Charles Owino says two of the women have been identified as Kenyans. One had a suicide vest that did not explode. Three female accomplices have been arrested from their Kibokoni residence in Mombasa.