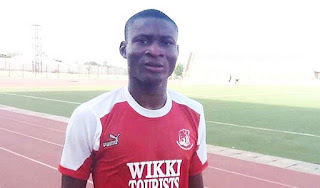 
The 19-year-old who was top scorer in the Nigeria Professional Football League with 18 goals last season was earlier expected to join Russia’s Spartak Moscow but was not offered a contract after failing to make an impression after a two-week trial period.

He also had a move to Slovakian club AS Trencin break down last year over contractual obligations.
Obaje’s elder brother Joshua who plays for NPFL club Plateau United informed newmen that Wikki Tourists and Etoile have reached an agreement over the transfer.

“Godwin has signed for Etoile du Sahel,” Joshua who was a member of the Nigeria home-based side Super Eagles squad that played at the 2014 Africa Nations Championship in South Africa told newmen

“The contract is for four and a half years and he is delighted to finally seal a move to a foreign club.
“It’ a new challenge for him and I hope he makes a big impact there.”

The Tunisian giants are also expected to finalise a deal for Enugu Rangers striker Chisom Egbuchulam this week.