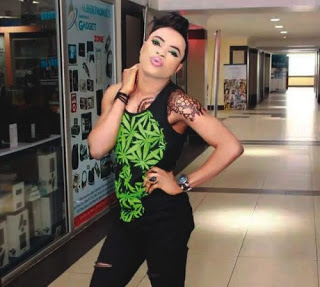 Popular Nigerian cross­dresser, Idris Bobrisky Okuneye, may have finally caught the attention of his soulmate.


A man who claims to be an American living in Texas and working with the National Aeronautics and Space Administration has expressed profound desires to hook up and even marry Bobrisky.

The request was sent to popular relationship blogger and psychologist, Adejoro Olumofin.

The yet ­to ­be­ named lover introduced his email by expressing anger at Olumofin for not linking him up with Bobrisky despite sending about six emails on the request alone.

“I have come to fall in love with someone in Nigeria,” he wrote.


“His name is Bobrisky. I love this guy so much, he is so real, but Nigeria is not ready for him.”

The unnamed man also offered to take Bobrisky out of Nigeria where he can then marry him.
He described Bobrisky as his “soulmate,” adding that he is addicted to his (Bobrisky’s) Snapchat.

It may come as a surprise to Bobrisky who was recently in London for a meet ­and­ greet event which
attracted £20 as entry fee.

The 26­ year ­old Nigerian has denied being gay many times before now.