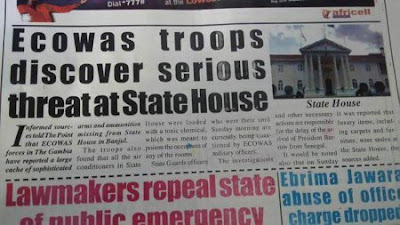 Economic Council of West African States, ECOWAS troops in The Gambia have reported a large cache of sophisticated arms and ammunition missing from State House in Banjul.


The Point, Gambian newspaper quoted informed sources that the troops also found that all the air conditioners in State House were loaded with a toxic chemical, which was meant to poison the occupants of any of the rooms.

The deadly chemicals in air conditions and offices at The Gambian State house are allegedly planted by former President Yahya Jammeh to kill the incoming government led by President Adama Barrow.

The paper said State guards who were there until Sunday morning are currently being questioned by ECOWAS military officers.

The investigations and other necessary actions are responsible for the delay of the arrival of President Barrow from the neighbouring Senegal where he had taken oath of office last week.