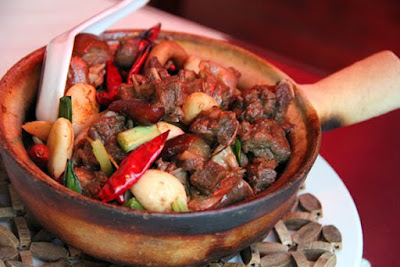 The Lagos State Police Command has arrested a 27-year-old man identified as Sunday Hyacinth for allegedly killing his friend, Onwe Ozoemelem, over dog meat worth N500.


The duo had engaged in a fight over the dog meat bought by their friend, during which Hyacinth allegedly killed the 26-year-old in FESTAC Town area of the state.


The state police spokesperson, Dolapo Badmus, who confirmed the incident at the weekend, said the suspect allegedly hit the deceased on the chest, after which he slumped and was rushed to a hospital, where he died.

She said the suspect was arrested by policemen from the FESTAC division before the case was transferred to the State Criminal Investigation and Intelligence Department, SCIID, Yaba.

According to her, the police was awaiting the result of the autopsy conducted on the corpse while the families of the victim and suspect were making plans to bury Ozoemelem in Ebonyi.

Narrating what transpired to the Punch, Hyacinth, who hails from the Ezzamgbo area of Ebonyi State, said he worked as a welder around the Waterside area of FESTAC.

He said, “Our other friend that bought the meat for us is like a big brother. We started sharing it in the order of seniority. The meat had gone round and it remained two pieces for me and the deceased. He suddenly picked the two and ate them. He then dropped the plate.

“I challenged him for eating the meat and he said the man that bought it didn’t say I must also eat from it. I told him if he needed to eat meat that badly he should have gone back to his village and that was how the fight started.

“After some minutes of wrestle, we were separated and I later went inside my room to drink water and change my clothes.

“I was even among those that rushed him to a hospital in the area.

“I didn’t punch him or use any object to hit him. It was just a normal fight and he was on top of me when we were separated.

“He told me he did not smoke because he had a chest pain that had been disturbing him for some time. I didn’t kill him,” the welder added.