Thank you @MBuhari, ECOWAS for being our guardian – Gambians 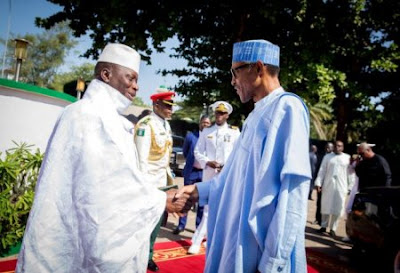 Some Gambians have taken to the social media to express their joy over the response from West African bloc and the world in ensuring true democracy reigns in The Gambia. Most of them have specifically thanked Nigerian President, Muhammadu Buhari and the ECOWAS in general for being their “guardians.”

Gambians took to social media, particularly the Twitter which had recorded more than 200,000 tweets in praise of Nigeria, Senegal and ECOWAS.

@ruthmaclean, said “Overnight Jammeh fired what’s left of his cabinet after mass resignations, and declared he would oversee all ministries himself. #GambiaRuth Maclean, ‏

Gambia Voices ‏@GambiaVoices, said: “Troops are in #Gambia. “They are walking towards Banjul. It is already war. If we find any resistance, we will fight it,” General Ndiaye.”

“BREAKING: Gambia’s army chief is celebrating and supporting the entry of Senegalese troops into the country to oust defeated president,” another tweet from Spectator said.

Gambia Voices ‏@GambiaVoices Thank you @MBuhari and thank you ECOWAS for being the guardian of democracy in our mama #Africa, you made us all proud! #Gambia is graceful.

Adama Barrow ‏@BarrowOfficial1, said: “Am taking this opportunity to thank the entire electorate of the #Gambia and Gambians in the Diaspora for making this day possible.”

On Jan. 9, Buhari lead two other West African presidents and other citizens to meet with Jammeh. Buhari in his capacity as mediator in chief traveled with his counterparts, Sirleaf and Koroma , as well as the immediate past President of Ghana, John Mahama, to the Gambia to meet with Jammeh.

But those talks yielded no results.

Embattled Yahaya Jammeh has remained adamant, refusing to cede power after being defeated by the erstwhile businessman-turned politician, Adama Barrow in the December 1 election held in the country. Although Jammeh had called his opponent to concede defeat, however, a week later, he made a volte face, refusing the outcome of the election, a stand he has adamantly maintained till now.

Thousands of Gambians and tourists fled the country as the tension kept rising, especially following the threat from ECOWAS that a military ousting would be carried out against Jammeh should he refuse to cede power peacefully.

But, despite the peaceful negotiations by the ECOWAS bloc to persuade Jammeh to step down peacefully, he has stayed put and has refused to accept Barrow as his successor.

West African leaders on Friday said they would travel once again to The Gambia in a last-minute effort to convince election loser Yahya Jammeh to cede power, a media report said.

It said the presidents of Liberia and Guinea were expected to arrive in Banjul to give Jammeh, who ruled the small West African nation for 22 years with an iron fist, a last chance to respect the constitution.

The announcement came hours after military forces of the Economic Community of West African States (ECOWAS) crossed from Senegal into Gambia in an attempt to search for Jammeh.

However, Adama Barrow who had equally fled The Gambia to neighbouring Senegal for his safety has been sworn-in as the new President of The Gambia.


In his inaugural speech, dressed all in white, 51-year-old Barrow waved to a crowd of thousands of jubilant Gambians during his inauguration, which officially ended Jammeh’s 22-year rule. “This is a victory of the Gambian nation. Our flag will now fly high among those of the most-democratic nations of the world,” he said, demanding loyalty from his armed forces.