There are 1.1bn smokers in the world – 226m of them live in poverty 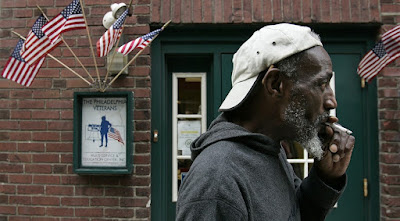 The world has 1.1 billion smokers aged 15 and above – and approximately 226 million of them live in poverty – a new report by the World Health Organisation has shown.


The research, which was published in ‘The economics of tobacco and tobacco control’, was carried out in collaboration with the National Cancer Institute of the United States of America.

“The tobacco industry and the deadly impact of its products cost the world’s economies more than US$ 1 trillion annually in healthcare expenditures and lost productivity,” said the report.

“Currently, around 6 million people die annually as a result of tobacco use, with most living in developing countries.

“Globally, there are 1.1 billion tobacco smokers aged 15 or older, with around 80% living in low-and-middle-income countries(LMICs). Approximately 226 million smokers live in poverty as about 80% of the world’s smokers live in LMICs.

“The tobacco industry produces and markets products that kill millions of people prematurely, rob households of finances that could have been used for food and education, and impose immense healthcare costs on families, communities and countries.”

Citing a 2016 study, the report stated that the annual excise revenues from cigarettes globally could increase by 47%, or US$ 140 billion, if all countries raised excise taxes by about US$ 0.80 per pack. Additionally, this tax increase would raise cigarette retail prices on average by 42%, leading to a 9% decline in smoking rates and up to 66 million fewer adult smokers.

“Tobacco control does not harm economies: The number of jobs dependent on tobacco has been falling in most countries, largely due to technological innovation and privatization of once state-owned manufacturing,” the report said.

“Tobacco control measures will, therefore, have a modest impact on related employment, and not cause net job losses in the vast majority of countries. Programmes substituting tobacco for other crops offer growers alternative farming options.

“Tobacco control reduces the disproportionate health and economic burden that tobacco use imposes on the poor. Tobacco use is increasingly concentrated among the poor and other vulnerable groups.”

“This report shows how lives can be saved and economies can prosper when governments implement cost-effective, proven measures, like significantly increasing taxes and prices on tobacco products, and banning tobacco marketing and smoking in public,” he said.