How Far Do You Think The Super Eagles Will Go In Russia2018 Without Financial Distractions?

Home / Nigeria / Politics / Sports / How Far Do You Think The Super Eagles Will Go In Russia2018 Without Financial Distractions?
Published by: Business Consulting 10:05 Nigeria, Politics, Sports 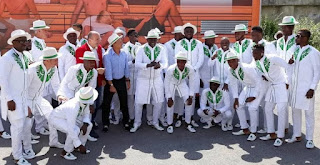 The Super Eagles have finally arrived in Russia from their Austria training base for Nigeria's 6th appearance at the World Cup tournament. Already, Naija has made a fashion statement in Russia with our native white and green attire, with the Super Eagles jersey said to be the most dazzling design.

Naija stays winning before the World Cup kicks off. The good vibes are a good way to blend in before the tournament but are the Eagles ready to play? Why do they usually crash out in the second round? The reason will surprise you.

More often than not, the Super Eagles fail at the World Cup because of money, players' allowances and bonuses.

The Super Eagles' historic problem with playing bonuses and allowances is well documented.

Bonuses and allowances helped create the mutiny against the NFF in France 1998 which led to the team fighting over money instead of preparing for the game against Denmark; the Eagles disgracefully fell 4-1. 2010 the same issue.

2014 no different. Every time the Eagles take their eyes off the ball and start chasing after money, tactical discipline suffer and we crash out.

To be successful in Russia, therefore, the Super Eagles must have their final ingredient, their playing bonuses and allowances have to be settled on time by the NFF or another tournament goes bust.

Thankfully, for the first time since the 1994 World Cup appearance, the Super Eagles have been financially settled by the NFF going into the tournament. No thanks to President Buhari non-interference and allowing the Amaju Pinnick led NFF to handle its affairs, all player’s allowances and bonuses have been provided.

Now that financial distraction has been removed from the equation, how far do you think the Super Eagles of Nigeria would go in Russia2018?