Abiola’s June 12 Investiture: The Renewal Of Nigerian Hope And The Way Forward 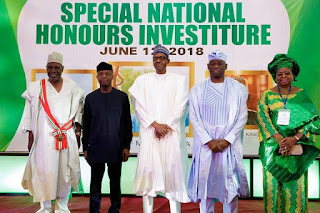 Don't blame millennials and other young adults who were indifferent and didn't see the big deal in the MKO Abiola and co investiture on Nigeria's new Democracy Day by President Muhammadu Buhari. Most of them weren't born or were toddlers when the actualization of the June 12 mandate began with the shocking annulment of the freest and fairest general elections in Nigerian history. How much emotions these indifferent youth feel about June 12 struggle depends on what they read from history books and stories passed to them by their elders.

Depending on who told the stories, June 12 could be a tale of personal interest or collective call for the entrenchment of a peoples’ political beliefs.

To Chief MKO Abiola's family, the presumed winner of the 1993 polls, the investiture meant the recognition of their father and mother’s (or step-mum) Kudirat’s dogged fight to the very end to set Nigeria free from the chokehold of the military.

To the children of the late Chief Gani Fawehinmi, the investiture was a recognition of their father's effort to entrench democracy in Nigeria.

Chief Fawehinmi was tear-gassed, buffeted by police batons and detained several times because of the June 12 struggle.

Ambassador Kingibe, on the other hand, was on the receiving end of President Buhari's magnanimity and sense of justice. Popular opinion wanted Ambassador Kingibe dropped for serving in the Abacha government which incarcerated Chief Abiola instead of restoring his mandate but President Buhari didn’t fall for the petulant pettiness that characterized the typical Nigerian politician. He showed grace and tact in keeping the ambassador in the honors list.

Beyond hyping president Buhari as most politicians were wont to do on such occasions, Asiwaju Tinubu emphasized something much more significant. Nigeria had been tethering on the precipice of disintegration since the annulment of the June 12 mandate because the nation appears to have lost its soul in the bitter struggle that pitched North against South, brothers against each other while seeking freedom from military rule.

What followed the annulment of June 12 was the hijack of Nigeria’s democracy by greedy politicians, who found reasonable success in looting and tearing the nation apart, pitching Nigerians against each other along religious and ethnic lines, for their own pecuniary interests. Stake after stake had been driven into the heart of Nigeria but her people are barely holding on to hope, waiting for a leader who would eliminate the average politician’s penchant for naked graft and looting instead of national development. The wait was long and torturous.

Since May 1999, Nigeria has had 3 presidents who always said the right things during the presidential campaigns but got consumed by ambitions of their own making when they walked through the doors of the prestigious Aso Rock Villa.

Leaders who climbed the throne on the masses hopes and feelings, leave them below while embracing their tormentors, the political and business elite.

We've had 3 cycles of such governance before deciding to take up President Buhari's change mantra.

While change is good, when it is accompanied by too many reforms caused by having too many problems to tackle at once, it appears to have crushed the people it was meant to reposition and address their conditions.

Not that the situations in the country were all of President Buhari's making but 3 years down the line, the streets aren't awash with food aplenty and the nation was yet to assume the semblance of the famous El-dorado. Hope was slipping away, Buhari was beginning to feel like previous leaders, till lost hope showed up on the horizon.

Former presidents in the Fourth Republic, Obasanjo, Yardua, and Jonathan, made the June 12 topic a taboo, an unspeakable aberration. And the trend continued during the Buhari administration for 3 years until out of nowhere, the president made took the bold step that calmed the tempest across the nation.

The June 12 declaration statement was received with rapturous glee by millions of Nigerians; the man whose brother got shot during one of the many June 12 protests, the woman who got widowed by the Abacha administration enforcers, the man who ran into another person's house to escape arrest from the police.

Hope in a just and courageous Nigerian leader was revived at last and the ghost of June 12 can be laid to rest.

In spite of the bitter history between the late Chief MKO Abiola and President Buhari, putting Nigeria first mattered more than his personal and bruised feelings.

If MKO Abiola deserved the honor, Buhari refused to stand in the way, he wouldn't let history remember him for blocking the path and failing to right the wrong of 25 years hard years in the lives of Nigerians.

June 12 was a date key to Nigeria's nascent democracy, it had to be honored. Honour went to whom it was due and Buhari, like Asiwaju Tinubu said, had demonstrated a commitment to transparency, rule of law and constitutional democracy.

The rebirth of General Muhammadu Buhari has been complete, he hopped on the train of democratic change before it left him behind at the station of history.

Inside and out, Buhari refused to be embittered about the past but chose forgiveness, moving forward and following a path of healing and regeneration, what Nigeria had been clamoring for since the democratic experience of June 12, 1993.

Though doubters of his Change mantra remain a legion, a determined Muhammadu is undaunted by the task ahead. Only a matter of short time before Nigerians see they are is in safe hands, all it takes is faith and the restoration of hope that he won't fail on this rescue mission. And with all Nigerian hands on deck, the Nigerian hope restoration project isn’t mission impossible.