So Who is A Buharist And What Does He Want for Nigeria?

Home / Nigeria / Politics / So Who is A Buharist And What Does He Want for Nigeria?
Published by: Business Consulting 18:03 Nigeria, Politics 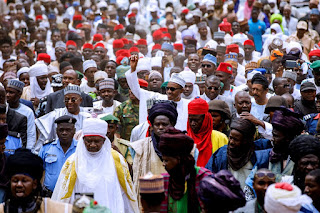 If there is anything to thank cheaper mobile technology and the proliferation of social media usage in the Nigerian society for, it is for helping to scale up political education and driving the engine of change.

Once upon a time, the ruling class preyed on the masses affinity for political apathy.

There was a period the average Nigerian who say, "Politics is a dirty game..." and wouldn't participate in the country's political process to the detriment of his development and aspirations. That was the era the ruling class preyed and benefitted immensely on the masses’ political illiteracy. It was the era of unbridled corruption, the ruled lacked a voice and all that changed with social media.

A good example was the success of the #OccupyNigeria protests that forced the Nigerian government to recognize the power of the people.

During the 2015 general election campaigns, the masses under the change banner switched the political process on the elite and went to the polls in their teeming millions to vote out an incumbent for the first time in Nigeria's political history. It was during the campaigns leading to the 2015 elections, the term, Buharist was coined.

It was a wonderful moniker for campaigners and supporters of President Muhammadu Buhari’s 2015 election bid.

Because social media could swing in both directions like the proverbial sword, three years down the line, the term Buharist has assumed another dimension in the social media space.

A Buharist is a strong supporter of President Muhamadu Buhari, who believes in the wind of change and the taciturn former general’s style of leadership.

Long before participating in the democratic process of the 4th Republic, President Buhari believed the key to Nigeria’s development is breaking the yoke of corruption from the nation’s neck.

The challenge initially looked easy but since winning the election, proponents and beneficiaries of corruption in the Nigerian way of life wouldn’t rest till they have tainted the term, Buharist.

To the uninitiated, a Buharist is a zombie-styled follower of President Buhari’s leadership style.

The uncouth social media who does not harbor dissenting views, who believe nobody else could lead the country out of the doldrums.

Buharists have been unduly tainted as religious bigots and ethnic champions of a ruinous course meant to crash Nigeria’s nationhood just to satisfy President Buhari’s drive to avenge the toppling of his 1983 military government.

Buhari never minced words about tackling corruption head-on since the 1980s, he lives for the day Nigeria would slay the dragon that had eaten into the fabric of her society.

What the fliers of this kite want Nigerians to believe is Buharists are brainwashed ethnic jingoists, who constantly shoot arrows of discord from behind the safety of their social media accounts.

What anti-Buharists don’t understand is President Buhari never swore any his supporters to any oath in 2015, they aren’t under duress but follow his change mantra because they believe in his honesty, integrity and unwavering stance that corruption must be vanquished if Nigeria must be great. That has not changed in 2015 and it hasn’t changed now. So for the sake of a clearing the air about the misconception created by the mischievous and doubters in a changed Nigeria, who is a Buharist?

A Buharist is a strong believer in the “Change” mantra brought to the political space by President Muhammadu Buhari.

Buhari found a place in the hearts of Nigerians who were tired of being denied positive growth and development by corruption.

People who were wary of not living up to potential because graft and financial inducement won't allow the best of Nigerians get to the pinnacle of the careers and place.

Buhari never gave up the dream of fighting the destroyer of dreams, corruption, to a standstill, neither have Buharists.

The journey had been slow but Buharists believe Nigeria can be rescued from the cesspool of corruption.

A Buharist is an optimist who sees the good in Nigeria and her various peoples scattered across the length and breadth of the country. He believes in what's good about other Nigerians and doesn't judge others based on ethnic or religious sentiments or stereotypes.

A Buharist is an aggregator of diverse thoughts and opinions who make decisions based on facts and not fallacies or fake news. He doesn’t believe in do-or-die politics, like Muhamadu Buhari, he is a dogged fighter who doesn’t know how to give up.

A Buharist is always graceful in the face of defeat in any political or intellectual discussion, he wouldn't take cheap shots at his opponents just to win an argument. He is a fact-checker who wouldn’t believe just anything throws at him but would verify before going public with it.

A Buharist is an epitome of honesty and integrity who wouldn't take what doesn't belong to him, by hook or crook. He is committed to the positive growth of Nigeria and wouldn't resort to underhand tactics to negate positive movement and growth of others.

A Buharist believes in accountability and isn't involved under-the-table deals to get ahead in business or life generally. He inspires confidence in others and infects them with his honesty and shows unwavering passion for Nigeria always.

A Buharist is a detribalized Nigerian who doesn’t engage in the use of fake news to buttress his political point. He is a forgiving Nigerian with a clear and lucid understanding of the peculiar nature of the country’s multi-faceted problems. He wouldn’t let prejudice get in the way of taking decisions key to the development of Nigeria.

A Buharist is a Nigerian who doesn’t engage other Nigerians in a war of words. He knows only cowards throw cheap shots at others from behind his social media accounts. He is a Nigerian who is accommodating of other people’s views and wouldn’t launch into a diatribe to score cheap political points. He doesn’t post hate speeches and lives peaceably with all Nigerians.

The race to the 2019 elections is already at a feverish pitch and only the most resilient can stand the barrage of abuse that lay ahead.

A Buharist, however, will not lose faith in the Change mantra. The time to fix Nigeria is now, and true Buharists will not fail to support President Muhammadu Buhari to get re-elected to fulfill his promises to the people of the Federal Republic of Nigeria. The desired change is at hand.