Osinbajo delivered a speech at the 90th birthday of Chief Olu Akinkugbe and the Fifth anniversary of the Olu Akinkugbe Business Law in Africa Fellowship conference, at Lagos Business School on Thursday.

The vice president said that the Buhari-led administration was focused on uplifting the poor in society through its SIPs.
He said that the programmes were aimed at ensuring that more Nigerians improved their lives and contributed more to the nation’s economy.

Osinbajo said that the problems of the poor in society must be addressed to help economic growth.

“A lot of our ideas in our social investment policies are micro credit loans to market women and petty traders and all of that are borrowed heavily from the Indian model.

“ A lot of the programmes that we are working on today; the Conditional Cash Transfers that we give to the poorest in society are based on many of these models.

“But these models are the products of a legal framework; they’re a product of a way of thinking about dissolving the problems of the poor.

“And we if we do not dissolve the problem of the poor, no matter how fancy our economic models or policies are, the vast majority of our people will be poor, consumer spending will be low, and generally speaking our economies cannot be where they ought to be, because the vast majority are so far behind,” he said.

According to the vice president, the rule of law remains the most potent weapon for socio-economic revolution because the success of African economies and commerce will depend largely on the enforcement of laws and regulations.
He further said that it was time for Africa to rethink and re-engineer its jurisprudence.

Osinbajo highlighted some challenges confronting Africa ranging from how to provide opportunities for millions of young men and women, to extreme poverty, illiteracy and disease, desertification resulting in famines and conflicts over land and water.

“All of these challenges clearly will define how the future of the world itself will shape up in the coming decades; simply because Africa has the population and continues to increase in that population day by day.

“Commerce and economic development cannot thrive where the majority is desperately poor, illiterate and exposed to diseases all the time.

He said that Africa needed the capacity to undertake complex economic studies of its diverse situations and present alternative or comparative perspectives, which could form the basis for more confident negotiations.

Felicitating with Akinkugbe on his 90th birthday, the vice president described him as a quintessential Nigerian business icon with a legacy of ethical conduct.

He said that the Olu Akinkugbe Business Law in Africa Fellowship was, itself, an investment in knowledge and scholarship, in people, and in the future of Africa.

On his part, Akinkugbe described Osinbajo as one that gave Nigerians hope for the future of the country. “It is often not the case that you have people with complete understanding of the problems that we face in the country.

“He (Osinbajo) has intervened in the different struggles in this country. “ May God help you to continue to give your best to Nigeria,” Akinkugbe said.

Newsmen report that on Aug. 2, the federal government said the sum of N140 billion out of the N500 billion budgeted for its SIP in 2017 has been released.

It also said for 2016, only N80 billion of the budgeted N500 billion, was released bringing total sum released to N220 billion out of N1 trillion within the period for the implementation of the four major components of the programme 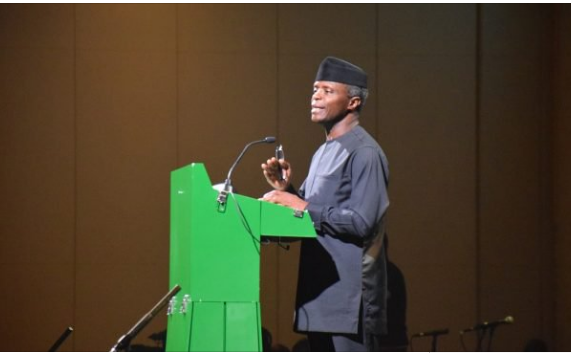