Towards flushing out Boko Haram and other insurgencies in Nigeria and the neighboring countries, an extra- ordinary meeting of Heads of State and Governments of the Lake Chad Basin Commission (LCBC) and Benin met in Abuja on Saturday.

President Muhammadu Buhari at the meeting insisted that the war against Boko Haram and other insurgencies must be won now.

The meeting, which is a follow up to a similar meeting held in N’djamena, the Chadian capital last month, was convened for the adoption of a report of the LCBC security and defence committee on the Boko Haram insurgency.

Speaking during the opening ceremony, President Buhari, who is the chairman of the LCBC, said the adoption of the report of the committee would bring a dynamism into the fight against the insurgents.
Stressing that the Boko Haram war must be won, he said, the time has come for evil of the Boko Haram to be brought to a definite end.

He said “Today’s Meeting is in continuation of our joint efforts to address the prevailing security challenges in our sub-region after our meeting on 29th November, 2018, in N’Djamena.

“Your participation in today’s summit, in spite of your tight schedules, is a clear demonstration of the resolute commitment that we all attach to the fight against our common enemy, Boko Haram, and the restoration of durable peace and security to our sub-region.

“Your Excellencies would recall that during our Summit in N’Djamena, the need to overhaul our current strategy and concept of operations in the fight against the Boko Haram Terrorists took the Centre Stage of our discussions.

“This was necessitated by the resurgence of attacks, particularly on the military, and the abduction of civilians for ransom across our borders by Boko Haram with the support of international terrorists who have infiltrated our sub-region.

“Our meeting today will consider the report of the Committee we set up during our last Summit on the way forward. I thank the Committee for meeting the deadline assigned to it and I hope that their recommendations will bring a new dynamism in the fight against Boko Haram and their international affiliates.

“The Lake Chad region has suffered decades of neglect and poor infrastructural development, the Boko Haram crisis in the last eight (8) years has worsened its already bad situation. We must take cognizance of the fact that sustainable growth and development of the sub-region is dependent on the quick attainment of peace and stability in the area.

“We must put an end to the crisis in the sub-region to enable meaningful development for its people. We must remain resolute and committed in our collective efforts at attaining peace as well as eradicating terrorism and violent extremism from the sub-region.

“The time has come for the evil of Boko Haram to be brought to a definitive end. I am sure that this summit will take the right decisions in this regard. This is a fight to the finish. We must, and we will, by the grace of God, wipe out terrorism from our sub-region.” he said.

While executing the war against the Boko Haram terrorists, he urged the leaders not to be oblivious of the fact that military may not provide the desired results alone.

According to him, there is the pressing need to pursue simultaneously both military and developmental approach to the challenges of the region.

He added “We will work towards strengthening of Civil-Military Cooperation in the fragile areas of the region to accelerate the implementation of the Regional Stabilization Strategy.

“Our military strategy must be complemented by the mobilization and deployment of adequate resources to ensure the reconstruction, rehabilitation and rebuilding of civil authority, as well as the provision of relief and succor for the affected.

“The Inter Basin Water Transfer project to recharge the disappearing Lake Chad would also go a long way in the restoration of sustainable peace and security to these areas.”

Buhari also paid tribute to the gallant troops who have remained focused and committed to the task of ensuring the safety and stability of the region.

He also urged the troops to remain steadfast in executing the war with the highest sense of honor, professionalism and patriotism.

Buhari went on “To our esteemed partners and the larger international community, we appreciate your valuable support and contributions in helping with the resultant humanitarian crisis. We thank you for intelligence sharing and operations in our determination to defeat Boko Haram and its affiliates.
“We, however, solicit greater cooperation and additional assistance to the LCBC/MNJTF to completely end the menace of Boko Haram and eradicate it from the sub-region. Such an outcome would add to global peace and security.” he said.

At the end of the meeting, a communiqué would be issued on the new strategy to be adopted in the fight against Boko Haram. 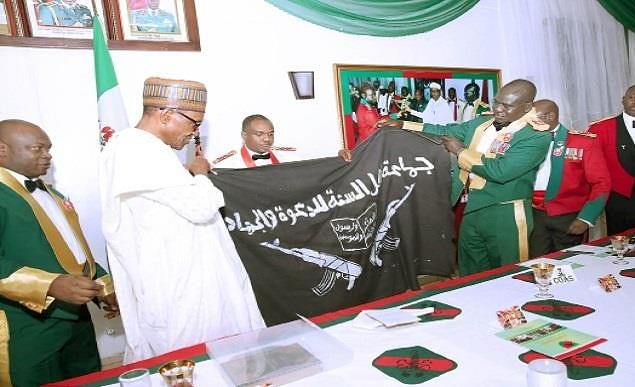