National Chairman of the ruling All Progressives Congress APC, Comrade Adams Oshiomhole, has described the opposition Peoples Democratic Party PDP as one lacking in internal democracy, alleging that the former ruling party printed only one nomination form in states where the sitting PDP governors are seeking reelection.

This was as the Nasarawa state Governor, Umar Tanko Al-Makura expressed optimism that the APC would go into the February general elections as a single fighting force, saying in spite of the acrimonious primaries of the party, none of the aggrieved stakeholders, particularly in the North East is ready to leave the APC.

Al-Makura, who chaired the Peace and Reconciliation Committee set up by the party to interface with aggrieved members of APC in the North East also gave assurance that his party “will sweep the whole North-east in the forthcoming elections.”

Speaking Monday at the APC National Secretariat when he led his committee members to submit the reports to the National Chairman, Adams Oshiomhole, the Nasarawa governor said he was impressed about the submissions of all the disputants.

“We are happy to also say that members made presentations and they were blunt, honest and open. And we gave everyone the opportunity to air their own views and grievances with a view to making necessary recommendations to the national headquarters of the party. Having gone through all these clusters and haven received all the complaints and grievances, we were impressed by the commitment of persons in their forthrightness to the party.

“Not in any single sitting did we find any aggrieved person willing to leave the party. In spite of their complaints, they were committed to staying within the party and to ensuring that the party excels.

“We are also appreciative of the support and cooperation and maturity of the leadership in the zones. The stakeholders and particularly those who were aggrieved, they made their presentations in the most expected decorum and etiquette for venting their grievances without sentiments; misdemeanor.”

While thanking the Al-Makura’s committee for devoting quality time to listen and analyse the problems, Oshiomhole said his leadership will study the recommendations and do justice accordingly.

“For example, we are the only party that allows people to contest election against a sitting governor. The other political party, particularly the past governing party, you check, all their sitting governors have an automatic ticket. They printed only one form. So you are not allowed to even murmur about your governor, the governor is a given, but here, in obedience to our rules, we allowed people who wished to challenge even sitting governors to do so and as we have seen in one case the governor couldn’t make a return, so democracy is attractive but it is also problematic but as you see it is still the best way to run a system and obviously to run the country. 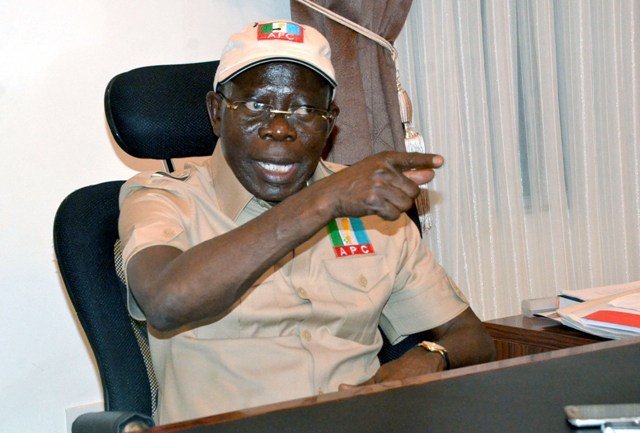