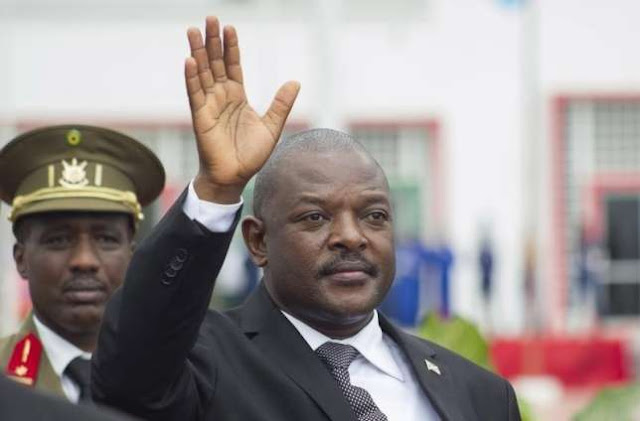 An official from Burundi's ruling party was shot dead, a local administrator said on Thursday, in what appeared the latest in a spate of tit-for-tat killings that U.N. officials fear is driving the nation back into conflict.


More than 400 people have been killed in politically motivated violence, U.N officials and rights groups estimate, since President Pierre Nkurunziza's announced his bid for a third term in April 2015.

Opponents said his move violated the constitution and a peace deal that ended the country's 1993-2005 civil war. The government cited a subsequent court ruling that said he could run again, and he went on to win a disputed vote in July.
U.N. officials have said the crisis risks pushing Burundi back to the kind of ethnically charged conflict that characterised the war, in which 300,000 people died.

Some 250,000 people have fled the country since violence erupted, most to border camps in neighbouring Tanzania.
Officials said armed men from among those refugees may have been responsible for a separate attack on Monday near the border in Burundi's Ruyigi district, in which five people died and seven were wounded.
"Based on what the population is saying, one can conclude that the attackers are Burundian refugees from Tanzania," another regional administrator, Gisuru Aloys Ngenzirabona, told Reuters.
Tanzanian officials could not be reached for comment.

A Burundi soldier was also killed on Thursday when an armed group attacked a military camp northwest of Bujumbura, an army officer told Reuters. There was no immediate official comment.
Three groups, including one led by officers behind a failed May coup, have launched armed rebellions against the government, officials say. None have claimed responsibility for the latest attacks.

Such incidents are likely to feed into concerns that the violence could spill over in the volatile Great Lakes region, which is still haunted by Rwanda's 1994 genocide. Rwanda and Burundi have the same ethnic mix, with a Hutu majority and Tutsi minority.