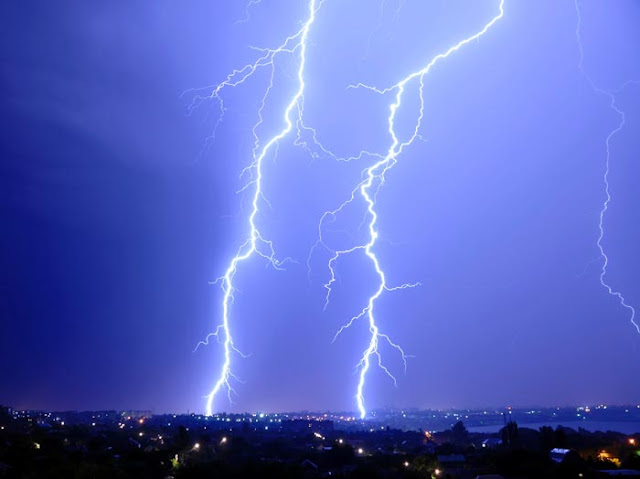 Two women have been mysteriously struck dead by lightning during a prayer session at the Heavenly Sure Charismatic Church, in Emekuku, Owerri, Imo State.


They are 25-year-old Chioma Jonathan, a native of Obiangwu in Ngor Okpala Local Government Area and 26 year old Chinonye Anyanwu, from Ahiazu Mbaise LGA in the state. They died instantly.

The 54-year-old General Overseer of the church, Pastor Luke Nwokocha, who led the short-lived prayer session, wasn't spared- he also got a jolt of the electricity from above.

He was off the direct path of the streak and received a much lower jolt of electricity, It was however strong enough to throw him across the room, knock him consciousness and injure his leg and hands.

“We always have fellowship every Tuesday. On the fateful day, we had our ‘Holy Ghost Hour’. We were five members in the church," he narrated the strange event.

"The two deceased sisters, including the sister that swept the church premises, Evangelist Solomon and myself were arranging the benches. Around 4.30pm heavy rain started falling. I started praying for the programme. Then there was a sudden lightning flash followed by the deafening sound of thunder".

"My wife, Pastor Eucharia Nwokocha and the other church member rushed me to the hospital for medical treatment. I have been in this ministry for 26 years. I have never experienced anything like this. I was called into ministry in 1990. Until that time, I was a policeman and served in the Imo State Police Command and retired at Akwa Ibom Police Command in July 2007. Following my retirement, I decided to focus on my ministry fulltime. I do not understand how it happened, its only God who understands and knows all” he said.


Imo state Commissioner of Police, Taiwo Lakanu said Pastor Luke is presently undergoing interrogation at the State Criminal Investigation Department while the corpses of the dead women had been deposited at the mortuary of the Holy Rosary Hospital, Emekuku.