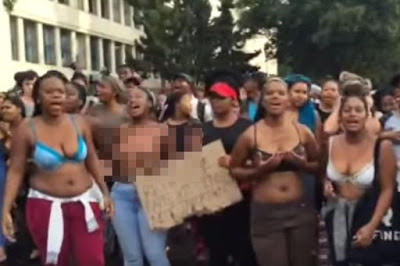 Females students of the Rhodes Univeristy  in Grahamstown, South Africa , took to the streets to protest  against incessant rape on campus. Topless female students with 'this is mine scrawled on their breasts' were seen among the protesters demonstrating against the rape culture on a university campus. The police have tried to disperse students using pepper spray and stun guns.


The students started demonstrating after a list of suspected rapists on campus was leaked on social media on Sunday.

Many students, who were raped on campus said they have reported rapes to the university as well as police, but that their complaints have been ignored by campus authorities, the BBC reported.
Students are demanding the university suspend 11 alleged rapists on campus who were listed on the leaked list on social media and change its policies on how rape victims are treated.

On Tuesday afternoon female students danced topless with some writing 'this is mine' on their breasts to show only they can decide to do with their bodies. 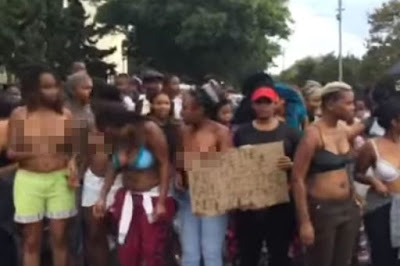 On Wednesday, more than 200 students were attacked with rubber bullets and pepper spray and stun grenades by police officers who were trying to disperse the crowd even after the vice chancellor of the University had begged the police to stop attacking his students.

According to Naledi Mashishi of the Students Representative Council, five students were arrested and one hospitalised after police fired stun grenades and rubber bullets at them.

Members of  the Students Representative Council said they will only stop if they are assured "no protester will face disciplinary action or be  penalised for participating in the protests”.
University lecturers have also joined in the demonstration.

National Education, Health and Allied Workers’ Union told Eyewitness News : “We decided to join the strike of the students because of the brutality of the police.
"We can’t watch our children being treated the way they were yesterday; so we took a decision that it’s too much now."
The protests are now being wound down as university staff agree to set up a task force to research the allegations.

Lectures are due to resume by next Monday.

According to statistics released, South Africa has the highest number of rapes in the world.

Eastern Cape police arrested five students during the protest . They were later released without bail and are due to re-appear on charges of public violence in July.