UN: Biggest killer of kids in the CAR not bullets but malnutrition 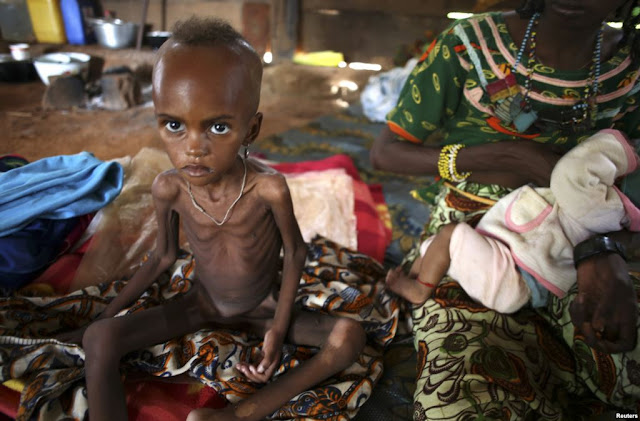 Three years after conflict erupted in the Central African Republic, the biggest killers of children aren't bullets but malnutrition, malaria, respiratory infections and diarrhea, the United Nations said on Monday.


UN spokesperson Stephane Dujarric said the mortality rate of children under the age of five is now above emergency levels in 11 of 16 prefectures across the country and in the capital Bangui, "marking a significant increase since pre-crisis level."

The UN humanitarian office, known as OCHA, said in its latest bulletin that the International Medical Corps reported that in these areas one out of every six children is "acutely malnourished."

Violence and upheavals in Central African Republic that began in 2013 have forced over 1 million people from their homes and left 2.5 million, more than half the population struggling to meet their basic needs, OCHA said.

Dr Sambo Soule, a Nigerian doctor who runs a nutrition center for the International Medical Corps in Vakaga prefecture, was quoted by OCHA as saying that acute malnutrition rates peak annually during the April-to-November "lean season," but the combination of conflict and severely restricted access to food have caused a sharper spike this year.

Before the violence erupted, OCHA said malnutrition levels for children under the age of five were extremely high due to widespread poverty, a fragile health system, lack of access to clean water and sanitation, and poor infant-feeding practices.

In the wider population, OCHA said a UN World Food Programme assessment in February found that hunger levels are also "staggeringly high" with one out of every two people unable to find sufficient food.

Dujarric said the UN is seeking $531m to help some 1.9 million people in need.

Central African Republic has recently made headlines because of allegations of child rape and other sexual abuses by international peacekeepers in the country including from the UN and France.