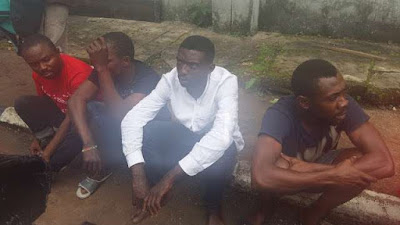 Police officers have arrested 7 fraudsters popularly referred to as 'yahoo boys', after a fight over a $7,000 deal.


The suspects were arrested on Saturday, September 3, at Ajah, after one of them identified as Henry Ezechie, feeling cornered in the deal he shared with one Kenneth Eric alias Biggie, made a report to the police alleging that the others were fraudsters and kidnappers.

Two of the arrested parties, Onwunama and Chukwuka have denied being criminals, claiming that they were just Biggie's friends and regularly visited his home.

Onwunama claimed to be a Government worker in Delta State and was lying somewhere in the house when the police made the arrests.

“They found nothing on me. They searched my phones and laptop and they didn’t see anything that has to do with fraud in it. I was just visiting my friend and I have spent two weeks in his place. I was to go back to Asaba on Sunday before I was arrested on Saturday. I don’t know how it is an offence to be a friend to a fraudster."

After admitting that he had reported the case to the police, Ezechie expressed his anger over the fact that Biggie refused to give him his 80% share of the said sum.

He said, “Biggie is the one owing me. We had a $7,090 deal and he refused to give me my 80 percent share of the money and so, I took the payment slip to the police to report. We do yahoo business (Internet fraud). It was my deal. He is the picker and so, his share is 20 percent.

“Picker is the person who receives the money and sends to Nigeria. He has contacts in America who pick the money and send through money transfer. I have been doing this business for some years now to survive, but this was my major breakthrough and he refused to give me my money. It is dating that we do. We use Match, Facebook and other sites."

Eric who also admitted to being involved in Internet fraud denied being a kidnapper or defrauding Ezechie, claiming that the deal had fallen through.

“Henry alleged me. He gave me a transaction of N300,000 which did not click and he went to the police to claim that I was a kidnapper and a fraudster. He left what we were doing and started talking rubbish. Whoever gave him that receipt he took to the police was just deceiving him. I do Facebook loto. We tell victims that if they pay $800 they will win $100,000. Most of our victims are white people because they are greedy,” he said.
Meanwhile, Chukwuka also denied being a fraudster, claiming that he had gone to Kenneth's place when he heard the police was raiding it.

“I was at my house when I heard that the police were at Kenneth’s place to arrest him that he was a kidnapper and a fraudster. So, I went there with my younger brother to explain that I know him. That he was not a kidnapper. That’s how I was also arrested. I did not do anything wrong. I have never been a criminal in my life."

me into burglary' - Suspect"
While parading the suspects,police commissioner, Fatai Owoseni disclosed that the suspects will be charged to court as soon as the investigation was complete.