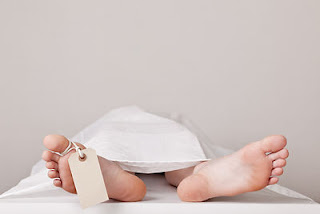 The body of an American businessman identified as Charles Coker was found dangling in a hotel in Lekki, Lagos State.


According to reports, the foreigner was on a business trip to Nigeria.

Although it could not be ascertained how long he had been in the country, it was gathered that he lodged in the hotel located on 8, African Line, Lekki Phase 1.

It was also gathered that apprehension set in after the 57-year-old business did not come downstairs for his breakfast. Vanguard gathered that calls to his intercom to invite him for breakfast was not picked.

Also, his mobile line was not answered. Manager of the hotel, Vincent Onwunke, who was alerted of the development was said to have contacted Carlson’s business partner with an undisclosed identity, who rushed to the hotel.
When the door of the room was forced opened, Carlson was found dangling from a rope tied round his neck, by the door.

Policemen from Maroko Division, who were alerted, came and removed the body to the mortuary. Spokesperson for Lagos State Police Command, Dolapo Badmus, who confirmed the incident.

She said the Commissioner of Police, Fatai Owoseni, had directed that the case be transferred to the Homicide Section of the State Criminal Investigation and Intelligence Department, Yaba, for discreet investigation.