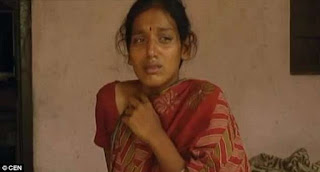 Following a prediction that her unborn grandchild would be a girl, an Indian mother-in-law attempts to burn the baby out of its mother's womb.


The pregnant mother is reportedly recovering at a hospital after her in-laws poured acid on her baby bump.

The victim named S Girija aged 27, is reported to have collapsed from the agony inflicted upon her by her husband's mother and sister with the use of a flesh-eating chemical mixture.

According to the investigators, the women carried out the heartless act in a bid to kill both the victim and her unborn baby after they were told by an astrologer that she was carrying a baby girl.

Although the culprits are currently on the run, Girija's husband and his father who were not named in the incident, have been arrested.

Girija who is already mother to an 18-month-old daughter was reportedly attacked to prevent her husband from fathering a second daughter.

Medics have revealed that Girija suffered severe burns over 30 percent of her body.

"We are waiting for chemical analysis report. It appears that they mixed a chemical in kerosene and poured it over her. We are on a look-out for Girija's mother-in-law."