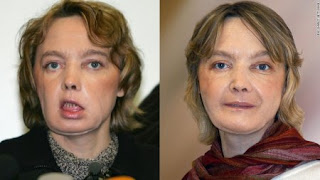 
Dinoire made medical history in 2005 when she received a graft comprising the nose, lips and chin of a brain-dead donor. She required the huge transplant to replace parts of her face that had been mauled by a dog while she was in a deep slumber after a suicide attempt.

Dinoire was given the lower part of a face taken from a woman who had committed suicide.

The hospital in Amiens, northern France, confirmed the death of "Mrs D., the first patient in the world to receive a face transplant in an operation carried out by Professor (Bernard) Devauchelle and his teams on November 27, 2005."

The hospital said her death on April 22 had been kept quiet until now to protect her family's privacy. "In accordance with the will of her relatives, no obituary was published in the press in order to protect their legitimate privacy at that painful time," the statement said.

She died "surrounded by her family", it said.