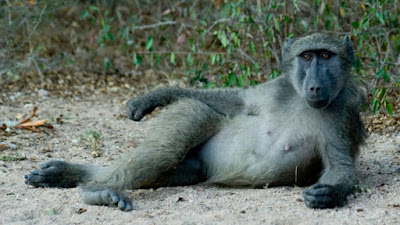 Men at a village in the North West, South Africa are leaving in fear over a big male baboon that likes to grope human males.

The baboon is said to have attacked more than six men in the past week and what’s baffling the villagers is the fact that the baboon only attacks guys and does not hurt it’s victims but rather performs se_xual acts on top of the terririfed victim and leaves.

One victim, George Chiune said he was coming from the local shebeen when the baboon attacked him and pinned him down.

“I thought it wanted to kill me but realised it was after my b_um,”, George said.

The baboon, which has been nicknamed Somizi travels alone and this, according to animal behaviour specialist is a strange occurrence because baboons are known to travel in troops. One specialist, Lizzie McKenzie said “the baboon might be an outcast and chased away from it’s troop. That is why it is travelling alone but as to the reason it’s attacking only males, it beats me. I have never seen that behaviour in my 20 years in this field,”she said.

When LiveMonitor visited the village, all male school kids were said to be wearing dresses as a preventative measure until the baboon has been dealt with.