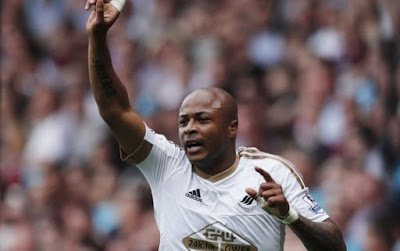 West Ham United’s Ghanaian attacker Andre Ayew says there is still room for improvement after they racked up a third straight Premier League win on Monday.


The Black Stars attacker opened the scoring in the Hammers’ 4-1 victory at the Liberty Stadium against his former side Swansea City, racking up his first goal for the club since joining at the start of the 2016/17 season.

“Personally, I think it was an important goal for me, but collectively it was our third win and we've done really well in the last few games," Ayew’s told West Ham’s official website.

“We didn't play our best football in the previous two games, but I think we managed to get two clean sheets and win those games.

“Today we played better football, but I think we can do even better with the ball. We've proved that we've got a good squad and if we keep working hard then we can get more results."

Ayew and West Ham will be in action again on New Year’s Eve when they play away to champions Leicester City.