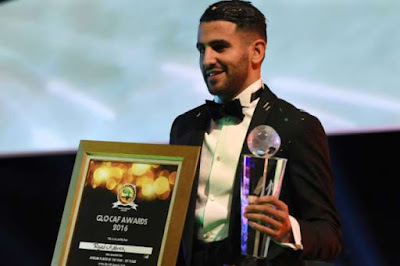 Algeria’s Riyad Mahrez has won the 2016 CAF African Footballer of the Year.

It is the first time Mahrez has been nominated for the prize, after he helped the Foxes win the 2015/2016 Premier League title, despite the 5,000-1 odds against them.

The 24-year-old scored 17 goals and provided 11 assists and was named PFA Player of the Year.
He received the award at a gala in Abuja, Nigeria.

The recipient of the award is decided by national team coaches and technical directors in Africa – with Yaya and Samuel Eto’o the most-honoured individuals with four titles each.