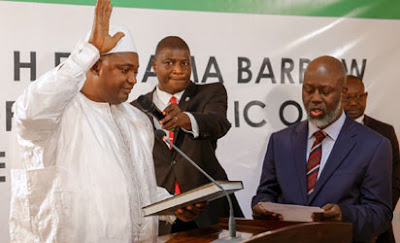 The Gambi on Monday awaited the arrival of President Adama Barrow as his team said former strongman Yahya Jammeh plundered the nation’s coffers before going into exile.


Barrow, who was sworn in as the new head of state on January 19 at his country’s embassy in neighbouring Senegal, has put off his return over fears for his safety.

His team refused to confirm to AFP on Monday exactly when he expected to return.

An aide to Barrow meanwhile accused Jammeh of emptying the state’s coffers by plundering millions of dollars in his final days in power. “Over two weeks, over 500 million dalasi ($11 million) were withdrawn” by Jammeh, Mai Fatty said. “As we take over, the government of The Gambia is in financial distress.” “The coffers are largely empty.” After 22 years of iron-fisted rule, Jammeh refused to recognise the result of a December 1 election won by Barrow, triggering a weeks-long political crisis. But under the threat of a regional military intervention, he chose exile in Equatorial Guinea, which is not party to the International Criminal Court. That means he cannot be extradited in the event he is charged with crimes against humanity or other serious offences.

Barrow’s spokesman Halifa Sallah told AFP on Sunday that Barrow aimed to set up a truth and reconciliation committee, his “preferred method” of dealing with grievances against the regime, though many Gambians want Jammeh and his entourage to be prosecuted.

Sections of the security services were under Jammeh’s personal control and are responsible for extrajudicial killings, torture and arbitrary detention, rights groups say.

Sallah added that Barrow had written a letter that “indicated that (Jammeh) would be treated as an ex-president, with the same rights and privileges as Dawda Jawara,” the country’s only other president since independence.

That includes immunity from prosecution, according to The Gambia’s constitution, unless two thirds of the national assembly votes to assert that legal proceedings are in the public interest. – ‘Good riddance!’ – On Monday, staff were working to ensure the presidential palace was safe for Barrow to enter.

While he is eager to return “as soon as possible”, according to Fatty, “the state of security in The Gambia is still fragile.” He said that Barrow hoped some of the 7,000 troops mobilised earlier this month by Senegal and four other nations would remain in place after his arrival.

A military aide to Barrow was due to be dispatched “to work with the security chiefs” of the army and police and finalise plans for his entry into the country, Sallah said. Gambians looked on in disbelief at the empty State House in Banjul on Sunday night, unable to believe it had finally been vacated, while cheering on and thanking the Senegalese troops.

“I was born and raised in Banjul. Good riddance!” said Mohammed Jallow, a 54-year-old businessman. “Barrow has a lot of work to do. He’s inheriting a very bad situation,” he added.