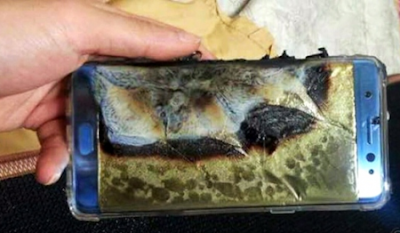 After recalling 3.06 million Note 7 phones, Samsung Electronics said Monday that problems with the design and manufacturing of batteries in its Galaxy Note 7 smartphones caused them to overheat and burst into fire.


The South Korean company was forced to discontinue the smartphone, originally intended to compete with Apple's iPhone, after a chaotic recall that saw replacement devices also catching fire.

The debacle cost the company billions in lost profit and reputation.

Internal and independent investigations "concluded that batteries were found to be the cause of the Note 7 incidents", Samsung said in a statement on Monday.

"We sincerely apologise for the discomfort and concern we have caused to our customers," said Koh Dong-Jin, the head of its mobile business, bowing before hundreds of reporters and cameramen at a press conference.

"We wanted to increase the battery capacity as much as possible. Our battery suppliers, in order to meet our needs, applied new designs and manufacturing technologies. Conclusively speaking, the cause of the Galaxy Note 7 burning incident was in the batteries.”

In September 2016, Samsung announced a recall of the oversized Galaxy Note 7 after several devices exploded or caught fire, with the company blaming batteries from a supplier.

When replacement phones - with batteries from another firm - also started to combust, the company decided to kill off the Note 7 for good.

In total, 3.1m devices were recalled as authorities around the world banned the device from use on planes and even from being placed in checked luggage.

The cost of the recall is estimated at $5.3bn.