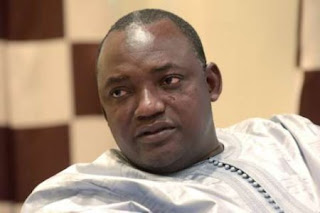 The eight-year-old son of Gambian President-elect Adama Barrow has died after being bitten by a dog, BBC reports.


Habibou Barrow is reported to have died on the way to the hospital after Sunday's incident in Manjai near Banjul.


His funeral has already taken place. Mr Barrow is in the Senegalese capital Dakar ahead of his planned inauguration on Thursday.

Mr Barrow has two wives and four other children, according to reports.