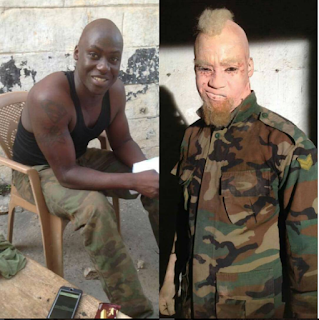 Photos of Ghanaian actor, Christopher Keith Nii Attoh popularly known as Chris Attoh have emerged where he has whitened his skin to look like an albino as part of a new movie project.


The makeup was done by award winning makeup artist Onlilogbo Hakeem, a 38 years old native of Abeokuta, Nigeria but lives and work in Lagos.

His current aim is to make a difference in Africa’s movie industry through special effects production.

The 35-year-old actor is married to Nigerian actress Damilola Adegbite with whom he has a son.


He has featured in award winning movies like Single and Married, Sinking Sands, Six Hours to Christmas , Love and War, the popular television series Tinsel and more.