The menace of Under Aged Clubbing in Nigeria

Home / Nigeria / The menace of Under Aged Clubbing in Nigeria
Published by: Business Consulting 20:17 Nigeria 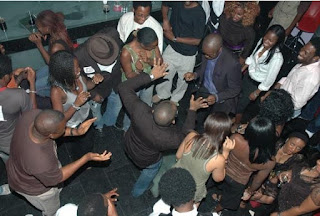 Let's be scared for the youth, Nigeria. Let's be scared for the youth. When a social problem doesn't get enough mentions and attention in our homes, and coverage in the press, we should all be afraid of the impending consequences. Normally, most under-18s spend their evenings cooped up in their bedrooms playing computer games or hanging out and sending snaps at the local shopping mall. When they start showing up in night clubs, the venue of vices and ‘exotic services’ created for people older than 18, Nigerians need to be very afraid.

These youngsters barely know their way through life and might get preyed upon by monsters of a different variety. What would be born would be frightening to the society. That is the dimension they problem of under-aged clubbing is beginning to assume in our society. Getting a cheap high is a small problem compared with the dangers of under-aged clubbing.

Under-aged clubbing might not be an issue yet but it is lurking somewhere under the surface somewhere, waiting to announce itself in a big way. Just because a big wig’s son hasn’t been apprehended for smoking crack in a nightclub doesn’t mean it’s not happening, under-aged clubbing should be nipped in the bud before a politically exposed individual’s daughter gets intoxicated and sexually abused on a night out with friends. Why the concern over under-aged clubbing all of a sudden?

Not too long ago, a certain Twitter user accused an eccentric socialite of sexually assaulting her at a Lagos nightclub when she was 16. Maybe she ought not to be there in the first place, what’s even more surprising allegation didn't get as much outrage as expected. You need to hear how many youngsters get taken advantage of on weekend night outs, the stories will shock you to the marrows. How come no one is paying attention yet?

For starters, young people are easily impressionable and easier to manipulate. When plied with drinks, they become total zombies and tools of whatever variety their manipulator desires. You say jump, they ask how high.

They are malleable, mostly validation seekers who are susceptible to peer pressure and likely to be given to unproductive habits more than most demographics. It's not everyone's problem now but wait till it spreads around like the Ebola virus, by the moral decadence would have taken over our dear nation.

How did we even get to the topic of under-aged clubbing?

Taking it from most Nigerian university admission statistics, more and more Jambites are matriculating at between the ages of 16 and 17.

The influx of these youngsters to the tertiary institutions isn't without its maturity issues.

These brilliant but under-exposed youngsters are highly susceptible to peer pressure and are usually initiated into night-time culture, especially frequenting watering holes and nightclubs with their more mature course mates. They usually don't experience the unaccustomed young adult lifestyles from 16 without getting burned. Sometimes with damaged psyches that requires counseling to heal up.

Can you curb your enthusiasm?

Freedom is a beautiful thing when taken in moderate dosage by growing, youngsters. But like every good thing in life when over-explored, freedom turns to a liability, bondage.

Due to having a lot of time in their hands, youngsters tend to get into more damaging habits that productive ones. Drinking way the evening is seen as far cooler than completing your research in the university library.

Have we even thought about exposure to sex and how much chance they have to explore their bodily functions? Youthful exuberance takes flight from the age of 16, nobody but the mature youngster can put a lid on his enthusiasm for everything he wants to explore.

How many youngsters are exposed to adequate sex education? In a society that shies away from sex talk, how do we think these youngsters cope?

What about the dangers of unwanted pregnancy?

For a society trying to put an end to the menace of unwanted pregnancy amongst its teeming youth population, curbing under-aged clubbing should be a top-priority.

If the Federal Government is trying to right the wrongs bedeviling the Nigerian society, under-aged clubbing should be receiving urgent attention.

By discouraging under-aged clubbing, society would have succeeded in closing the door on the menace of unwanted pregnancies, thereby, reducing the number of babies by dumped in cartons and nylon bags in many of Nigeria's tertiary institutions and cities dumpsites, waterways and canals.

And there are STIs to worry about too

How can we talk about public health safety and not look at STIs?

Impressionable youngsters worry more about not getting pregnant than contracting a Sexually Transmitted Infection.

An untreated STI is far more dangerous than an unwanted pregnancy. How many homes do parents teach their children about protection from STIs and STDs?

The under-aged clubber is more exposed to the danger of failing to protect himself than flunking his/her GNS 101 exam.

So what's the way Out of the under-age clubbing malaise?

Before blames of moral upbringing is laid totally on the doorsteps of parents, someone had already detailed security agencies to handle drug addiction and other socially unacceptable vices.

If government machinery can be deployed to combat drug addiction and Shisha smoking, then there's nothing wrong with directing it at under-aged clubbing.

This is about safe-guarding the future of young Nigerians. What anybody does with their bodies as adults is their problem but discouraging the propagation of broken youth is as vital as turning out the right constituency project.

Protection our nation's youngsters should be everybody's business. Club owners should insist on seeing identification before opening their establishment to clubbers. Fake Id scenario might come up but starting trumps the anticipated speculation of how the youngsters would beat the compulsory identification problem.

If society fails to act now, the rescue of under-aged clubbers from morally damaging social vices would escape like a bird from a cage.

It’s imperative to begin the rescue mission now because a stitch in time today would save nine tomorrow.

Financial poverty is bad enough a problem for government to wrestle, adding a social vice would leave society crippled in the morass for an even longer time to come.