Lagos State Governor, Mr Akinwunmi Ambode has lauded the people of Akwa Ibom for trooping out in large numbers to witness last Friday’s official flag off of the Presidential campaign of All Progressives Congress (APC) for the 2019 general elections, saying the development was an eloquent confirmation that President Muhammadu Buhari is head and shoulders above the other candidates.

Speaking to reporters at the Godswill Akpabio Stadium in Uyo, Governor Ambode said it was particularly instructive that such a massive crowd received the President and leaders of APC across the country, adding that it was gratifying that the sterling achievements of President Buhari in office so far were being noticed and appreciated.

According to him, “This is a great day for democracy and good governance in Nigeria. The crowd that came to the stadium for the rally eloquently reaffirms the invincibility status of President Buhari.

“I mean if such a large crowd could gather at the stadium to receive the President in the South South, it means the people have seen the light which President Buhari and Vice President Yemi Osinbajo represent for this country.”

He said as promised by the President, the re-election of President Buhari come 2019 would translate into improved infrastructure, economy, security and anti-corruption drive, among others, saying that a solid foundation to put the nation on sound pedestal had been firmly established in the last three and half years.

“What I want Nigerians to know and appreciate is that the re-election of Buhari/Osinbajo ticket in 2019 can only translate to improved security, economy, quality infrastructure and massive scaling up of anti-corruption drive, among others.

“In the last three and half years, President Buhari and Vice President Osinbajo have laid a solid foundation to put the country on a sound footing for economic growth and development. They have initiated social inclusion policies and constructed critical infrastructure across the federation thereby positively torching all the fabric of the nation.

“At this critical point in time in the trajectory of this country, we cannot afford to go back to the old inglorious days by bringing back a PDP (Peoples Democratic Party) government. They led us astray but the APC government is rebuilding Nigeria and taking us to enviable heights in the comity of nations. The PDP cannot just overnight be the solution when the party is the problem.

“What is left is for the people to face the 2019 elections with a determination to take Nigeria to the next level and the only sure way to do that right now is the re-election of President Buhari and Vice President Osinbajo,” Governor Ambode said. 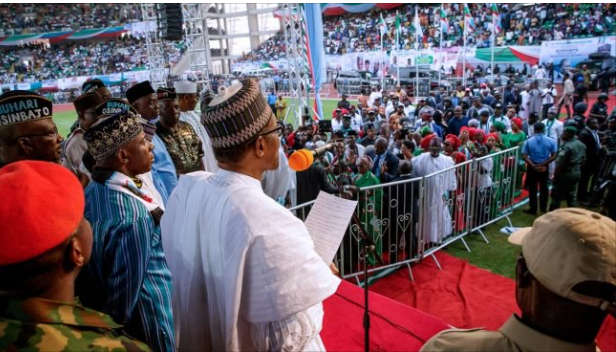