Ahead of the 2019 general elections, the governorship candidate of the All Progressives Congress (APC) in Yobe State and the National Secretary of the party, Hon. Mai Mala Buni, has declared that the flag off of the 2019 presidential campaign in Uyo, Akwa Ibom State on Friday was a clear indication that President Muhammadu Buhari will win second term.

President Muhammadu Buhari had on Friday, flagged off the All Progressives Congress (APC) Presidential campaign for the South-South geopolitical zone in Akwa Ibom.

According to Buhari, Nigerians will not regret voting for APC candidates in 2019.

Buni, who made the prediction in a statement on Saturday afternoon, said he watched with keen interest the official flag off in Saudi Arabia where he is currently performing lesser Hajj in the Holy land offering prayers for the success of the 2019 general elections.

The statement reads, “I wish to congratulate our dear President Muhammadu Buhari and our great party, the All Progressives Congress (APC) for the successful outing. I want to say this is just the beginning of the success of the 2019 general elections in our progressive movement to the Next Level, Insha Allah.

“The mammoth crowd that welcomed President Buhari is an indication of love Nigerians have for him and his good works to put the country on sustainable path of progress.

“We are sure of winning because, our policies and programmes speak for us President Buhari would be reelected in 2019, while Nsima Ekere would be elected as the next Governor of Akwa Ibom state, God willing.” 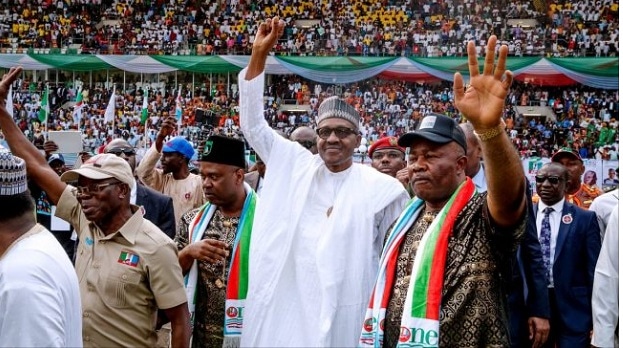