Kissing In Church During Wedding Is A Sin -Nigerian Bishop

The Bishop of Niger Delta West Diocese, Rt Rev. (Dr) Emmanuel Oko-Jaja, has declared that the act of kissing ones bride at the alter during wedding is a sin.

According to him, allowing couples to go through the process in church during their wedding service is unscriptural and therefore be discouraged.

Oko-Jaja said that unwholesome practices taking place in churches during matrimonial services promotes immorality and corrupt the mind of especially teenagers that are in church to witness the practice.

The cleric said this while delivering a sermon during the child presentation and Thanksgiving Service at St Mark’s Anglican Church, Biogbolo in Yenagoa, Bayelsa State on Sunday.

He said that the act of allowing groom to kiss the bride in the full glare of both the young and old persons emanated from the teachings of false prophets.

He called on all true believers to jealously guard against the antics of fake gospel preachers.

“The practice where couples are allowed to kiss in the church during wedding service is unscriptural. I wish to direct clergymen and church workers in this Diocese to guard against such unholy conducts.

“According to the scriptures, the church is not supposed to serve as a place meant to promote immorality but encourage people to uphold and practice Christian virtues with a view to winning souls for Christ.” 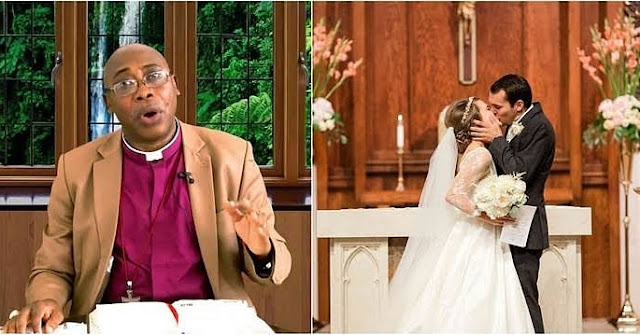