Roberto Firmino scored a hat trick as Liverpool came from behind to hammer Arsenal 5-1 and go nine points clear at the top of the Premier League.

Back-to-back defeats for title rivals Manchester City, as well as a shock 3-1 loss against Wolves for second-place Tottenham on Saturday gave Jurgen Klopp's men the chance to cement their place as title favourites -- and they did so in fashion.

The hosts were on top in the opening exchanges, before Arsenal grew into the match and took the lead on 11 minutes. Dejan Lovren gave away possession and Alex Iwobi fed Ainsley Maitland-Niles, who slipped the ball past Alisson for just the third goal Liverpool have conceded at Anfield all season.

However, the lead only lasted three minutes as Firmino scored his first home goal of the campaign in the Premier League with a typical no-look tap into the empty net after benefiting from a ricochet inside the Arsenal box.

Two minutes later the Brazil international put Liverpool in front -- and there was no luck about this one as Firmino slalomed past three Arsenal defenders before slotting the ball past goalkeeper Bernd Leno.

Liverpool were rampant and made it 3-1 on 32 minutes as Sadio Mane guided the ball into the net, having been played in by Mohamed Salah.

Arsenal's frustration was evident and Granit Xhaka was lucky to stay on the pitch after being booked for a foul Andy Robertson before kicking the ball away -- and it got even worse for the visitors in first-half stoppage time as Salah was brought down in the penalty area by Sokratis Papastathopoulos.

The Liverpool forward dusted himself down to get his name on the scoresheet as he powered his spot kick past Leno, who got a touch on the ball.

Arsenal boss Unai Emery replaced Shkodran Mustafi with Laurent Koscielny at half time as he looked for a way into the match, but his side remained second best.

Aaron Ramesy had a glorious chance to pull one back on 55 minutes, but he chose to slide ball across to Pierre-Emerick Aubameyang, and the Gabon international was lucky to be called offside as he put the ball over the bar from close range.

Any hope of a sensational comeback was put to bed when Sead Kolasinac was adjudged to have pushed Lovren in the area, and Firmino buried the resulting penalty in the corner to make it 5-1 and complete his first hat trick for Liverpool.

The result increased Liverpool's lead over Tottenham is nine points, but it will be cut to seven if Man City claim a win at Southampton on Sunday.

City and Liverpool then meet at the Etihad on Thursday. 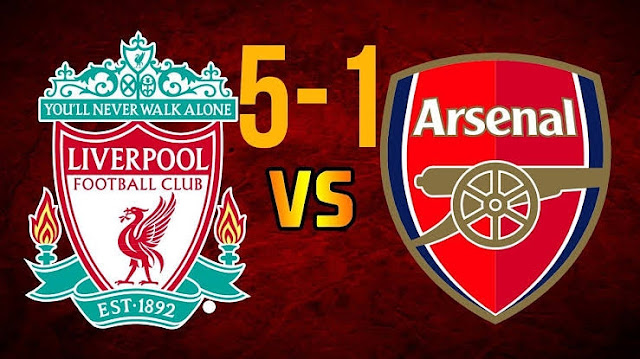