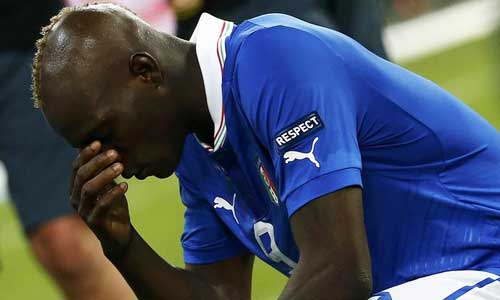 AC Milan striker Mario Balotelli regrets choosing to represent the Italian national team rather than Ghana’s Black Stars, according to his biological father.


Thomas Barwuah, the Ghanaian who gave up the striker for adoption when he was a child, has revealed that racist abuse and a hostile media have left Balotelli regretting his decision.

The striker now rues his decision to turn down the Ghana FA when they tried to convince him to represent the West African country back in 2011.

Balotelli instead gained full Italian citizenship and went on to play for the Azzurri, notably starring in their run to the final of the 2012 European Championships.

However, a recent loss of form means he is unlikely to make the national team squad for the upcoming 2016 Euros in France.

“Himself [Balotelli] has started realising he made a big mistake playing for the Italian national team and he has told friends about it,” Barwuah told GazzettaGhana.

“He is not being treated well, true they don’t show him the love he deserves for his great talent and skill.

“I think that all he gets is abuse, especially from the media here and that is because he is black”.

“They don’t like him and it started from the beginning, they didn’t want to see a black boy like himself taking glory of the Italian national team.”