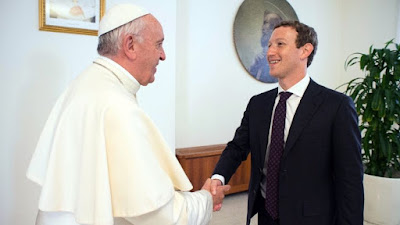 "Hi atheists, Mark Zuckerberg, co-founder of Facebook, is no longer with you". The multi-billionaire, who was raised in a Jewish family, says he is returning to the faith.


In a Facebook message on December 25, 2016,  Zuckerberg brought Christmas greetings from his family.

“Merry Christmas and Happy Hanukkah from Priscilla, Max, Beast and me! Seeing the moments of joy and family shared on Facebook today is one of my favourite things about our community,” he wrote on Facebook.

Zuckerberg then goes on to say a word of prayer for the entire world.

“I hope you’re surrounded by friends and loved ones, and that you have a chance to reflect on all the meaningful things in your life. May the light of your friendships continue to brighten your life and our entire world.”

He was quickly questioned by José Antonio, a web developer and Facebook user. “But Aren’t You Atheist?” Antonio asked, and Zuckerberg said he was no longer an atheist.

“No. I was raised Jewish and then I went through a period where I questioned things, but now I believe religion is very important,” Zuckerberg replied.

The 32-year-old had publicly claimed to be an atheist, via his Facebook profile, but has now removed the detail from his profile, leaving no information about his religion.

Zuckerberg however seems to be more inclined to Buddhism, having married a Priscilla Chan, a practicing Buddhist, and being obviously mentored by Steve Jobs, who was an active Buddhist in a better part of his lifetime.

In 2015, Zuckerberg, who was born into a Christian family, said a prayer in front of the Wild Goose Pagoda — a Buddhist landmark in Xi’an, China.

“Buddhism is an amazing religion and philosophy, and I have been learning more about it over time. I hope to continue understanding the faith more deeply,” he wrote on Facebook after the prayers.

Zuckerberg met Pope Francis in 2016, and promised to help spread the Pope’s “message of mercy and tenderness”.

“It was a meeting we’ll never forget. You can feel his warmth and kindness, and how deeply he cares about helping people,” he wrote on Facebook without speaking of Christianity.