The Minister of Labour and Employment, Dr Chris Ngige, has warned the South-East they could miss out on a chance to produce the president of the country in 2023.

The people of the zone have failed in their bid to have one of their own as the leader of the country since the return of democratic rule in 1999, and Ngige believes they have a chance to grab the post if they play their cards right in the 2019 general elections.

Speaking with reporters in Obosi in Idemili North Local Government Area of Anambra State on Sunday, Ngige said President Muhammadu Buhari’s reelection was the South-East’s shortest route to the presidency.

He said, “This man (Buhari) has only one term (four years) to do and go home, and an Igboman will replace him. But if you leave this shortest route and take a gamble, you are on your own.”

He added, “If Igbo refuse to play their cards right in next year’s general elections, the South-West will take away the chance from them.

“They will produce the next president after Buhari, because the zone has shown demonstrable commitment to Buhari’s cause.

“My good friend Babatunde Fashola has blown the whistle. What he said should be a warning signal to the Igbo, because you can’t stop the South-West from producing the next president of the country after supporting Buhari and the APC government.

“That is why I’m telling our people now to come out en masse in next year’s election and vote for Buhari, so that nothing will stop you from succeeding him in 2023.”

He described the vice-presidential slot given to the Igbo by the Peoples Democratic Party as a “mere spare tyre that might be used for over six years”.

According to the minister, it is not true that Buhari hates the Igbo, stressing that the late Dr Chuba Okadigbo, Edwin Ume-Ezeoke and others were close friends with the President.

The minister said the Buhari government had provided infrastructure in the South-East, saying he deserved their support.

He insists the real Buhari is the one ruling the country, dismissing the rumours about a cloned Buhari at Aso Rock.

Ngige said “we should stop listening to all these gutter talks” that one Jubril from Sudan or Chad is the one ruling the country, as the real Buhari is dead.

He said, “I’m talking to you as medical doctor. If you are well treated by your doctor, you will be rejuvenated; that’s the case with Buhari. That is why is bubbling with life. His doctors treated him well.”

“I asked our people to come out and vote massively for him in the 2019 general elections. We should stop listening to all these gutter talks. The man in Aso Rock is Buhari and no other person. I see him regularly. He’s the man that employed us as ministers and the one we meet with during FEC meetings.” 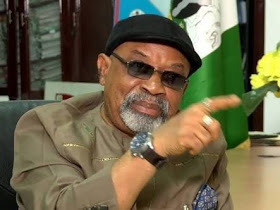