Vice President Yemi Osinbajo on Friday, inaugurated the “Traders’ Money Scheme”, an initiative of the Federal Government in Warri, Delta.

Osinbajo, who spoke at the palace of the Olu of Warri, Ogiame Ikenwoli, before the event, explained that the scheme was targeted at the petty traders who required little, to run their businesses.

According to him, the beneficiaries will be given N10,000 each. as loan to be refunded.

“We looked at the whole commercial scale of Nigeria and observed that the largest number of people engaged in commerce, are the petty traders that required little start-up capital between N2,000 and N5,000.

“We then felt it will be better to give these traders N10,000 each as loans to be paid back.

“Once that is done and refunded, we increase the loan to N15,000 each and keep increasing it, so long as they pay back.

“The scheme is designed to elevate those people at the lower ladder. I strongly believe that this is the right thing for our people, a way of empowering them.

“The enumerators will be here till January 2019 to ensure that the petty traders are captured,” he said.

Osinbajo said that the Federal Government also had the “Money Market Scheme” for the senior traders.

He said the traders in this category would be given between N100,000 and N350,000, adding that the beneficiaries would be guided to ensure they achieved their objectives.

Earlier, the vice president said government had embarked on different developmental projects in Delta, with a view to boosting the economy of the state and Nigeria.

“We have been able to fulfill some of those promises we made, particularly the Maritime University, though there are still issues to be resolved, but we have established it.

“We have established one modular refinery and other three are on the pipeline.

“The dredging of the Escravos bar, which will open up the Warri Port will be a big boost to the state, particularly the young men and women looking for opportunities.

“Also, the Export Processing Zone (EPZ), is being executed by the Niger Delta Development Commission (NDDC). All these entire projects, will enhance the economy of the Itsekiri kingdom,” he said.

Responding, Mr Dickson Kpori, who spoke on behalf of the monarch urged the Federal Government to ensure that the scheme succeed in Warri.

Osinbajo and his entourage, thereafter, moved to the Main market in Warri South, to inaugurate  the scheme. 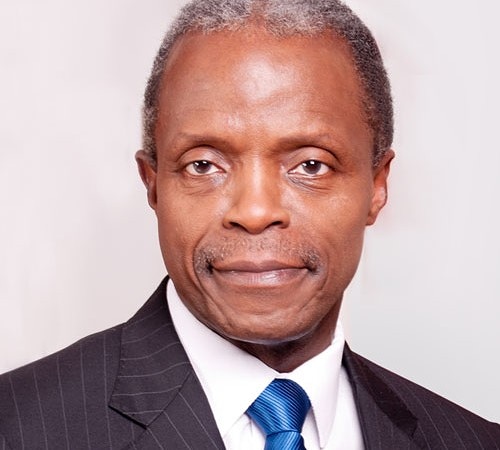